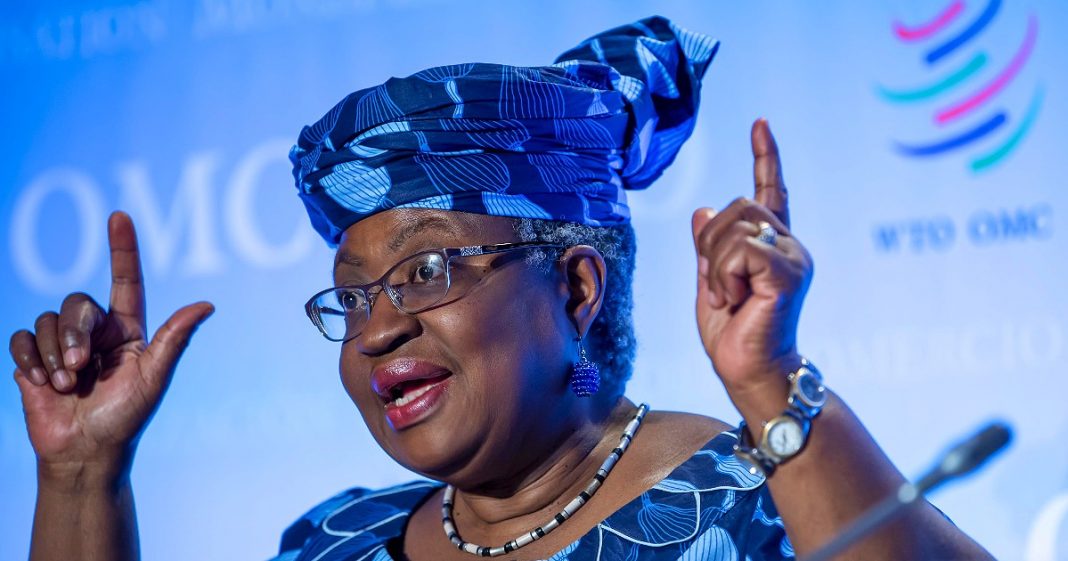 WTO has announced Okonjo-Iweala as its new DG.

The Announcement says ”WTO members made history today (15 February) when the General Council agreed by consensus to select Ngozi Okonjo-Iweala of Nigeria as the organization’s seventh Director-General”.

Okonjo- Iweala, who has a track record of taking on seemingly intractable problems, will have her work cut out for her at the trade organization, even though Donald Trump, who was very critical of the group is no longer in the White House.

The Joe Biden administration swung the contest in her favour after the only other remaining candidate, South Korea’s Yoo Myung-hee, withdrew from the race, following a meeting with US officials.

As the Director-General of WTO, a position that wields limited formal power, Okonjo-Iweala, 66, will need to broker international trade talks in the face of persistent U.S.-China conflict, respond to pressure to reform trade rules and counter protectionism exacerbated by the Covid-19 pandemic.

Former WTO chief, Pascal Lamy, in a chat with Reuters, said, “She brings stature, she brings experience, a network and temperament of trying to get things done, which is quite a welcome lot in my view. I think she’s a good choice. Key to her success will be her ability to operate in the centre of a U.S.-EU-China triangle.’’

Okonjo-Iweala, who is expected to become one of the few female heads of a major multilateral body, said her priorities include getting long-blocked trade talks on fishery subsidies across the finish line and breathing life back into WTO’s Appellate Body.

The Trump administration’s main criticism of her was that she lacked direct trade experience compared to her main South Korean rival and even supporters say she will have to quickly get up to speed on the technicalities of trade negotiations.

While rejecting this claim, Okonjo-Iweala said she has plenty of experience in trade plus other expertise, insisting that what is needed to lead the WTO is not technical skills but boldness and courage.

She said, “The qualities I have are even better.’’

Kingsley Moghalu, former deputy governor of Nigeria’s central bank who worked with her when she was the country’s first female finance minister said she is persistent and stubborn.

Okonjo-Iweala who is a special envoy for the World Health Organization on COVID-19 and, until recently chair of the board of global vaccine alliance Gavi, told Reuters that trade’s contribution to public health would be a priority.

The WTO currently faces a deadlock over the issue of waiving intellectual property rights for Covid-19 drugs, with many wealthy countries opposed.

She argued during the race that she was best placed out of the 8 candidates for the post to help WTO navigate through the crisis, insisting that she is a reform candidate.
Even before the outbreak of the Covid-19 pandemic with its devastation of the global economy, the WTO was weighed down by stalled trade talks and struggled to curb trade tensions between the United States and China.

It can be recalled that the South Korean opponent formally withdrew her candidacy after consultations with the Biden administration, clearing the way for Ngozi Okonjo-Iweala to clinch the WTO top post after opposition from the former Trump administration.

The United States Government through the US Trade Representative, formally backed Ngozi Okonjo-Iwela for the position of the Director-General of WTO, describing her as someone who would bring a wealth of knowledge in economics and international diplomacy.

The Few, the Proud, the White: The Marine Corps Balks at Promoting Generals of Color