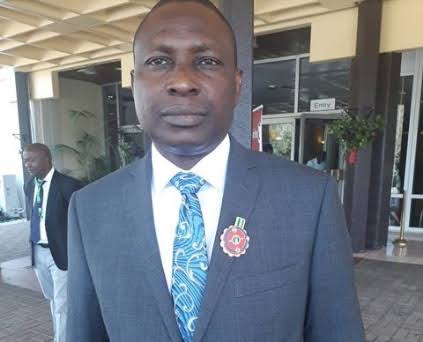 The Secretary to the Economic and Financial Crimes Commission (EFCC), Olanipekun Olukoyede, will take over as acting Chairman of the anti-graft agency, ElombahNews has learnt.

Mr Olanipekun Olukoyede was confirmed by the Senate as the Secretary to the EFCC in November 2018.

The confirmation was in accordance with Section 2(3) of the EFCC Establishment Act 2004.Before then, Olukoyede who was the Chief of Staff to then EFCC acting Chairman, Ibrahim Magu, was nominated by President Muhammadu Buhari on September 10, 2018 to replace Emmanuel Aremo, whose five-year tenure expired in July 2018.

A seasoned and erudite lawyer with several years of experience at the Bar, Olukoyede is a regulatory compliance consultant, who specialises in compliance management, corporate intelligence and fraud management.

He is a certified fraud examiner who has led and managed investigation and civil litigation of fraud and financial crimes in International development project.

He is a widely traveled scholar who has attended a number of training programmes within and outside of Nigeria, focusing on fraud and corruption investigation.

He also specialises in Anti-Corruption Research and Analysis, Corporate and Business Intelligence Gathering and Process.

The suspended acting Chairman of the Economic and Financial Crimes Commission (EFCC), Ibrahim Magu, being interrogated by the Justice Ayo Salami-led presidential investigative panel, was on Tuesday, moved back to the Force Criminal Investigation Bureau (FCID).

His grilling at the hands of the panel members taking place at the State House Conference Centre ended at about 8:30 pm.

The anti-graft boss was said to have been taken back to the bureau in the same manner he was driven there on Monday night.

Recall that ElombahNews reported on June 19, 2020, that the Attorney-General of the Federation (AGF), Abubakar Malami (SAN), had asked President Muhammadu Buhari to remove the Acting EFCC Chairman.

But a member of the Presidential advisory committee on corruption said Malami is exploiting his closeness to President Buhari to advance his own nefarious agenda.

In a memorandum to the President, Malami accused Magu of several offences.

The offences included “diversion of recovered loot, insubordination and misconduct”.

The Minister of Justice also claimed that Magu allegedly sold most of the recovered assets by the EFCC without anyone’s knowledge.

Malami added that the EFCC boss is reckless and a liability to the anti-corruption war.