Thousands of NHS workers marched on Downing Street to show their anger after being snubbed for a pay rise – despite the heartbreaking toll of the coronavirus crisis.

Many gathered with placards, including one which reads: “We risk our lives to save yours”.
Another says “Boris you clapped for us, now top us up”.
Health and social care staff were overlooked by the government in the latest round of public sector pay rises.
More than 500 NHS and care workers have died after exposure to Covid-19, amid a shameful failure to provide them with suitable PPE.
Ministers put off a pay rise for NHS staff until April next year – when the three year pay deal comes to an end.
Last week chancellor Rishi Sunak awarded up to a 3.1% pay rise for 900,000 public sector workers, including doctors, teachers and police officers. 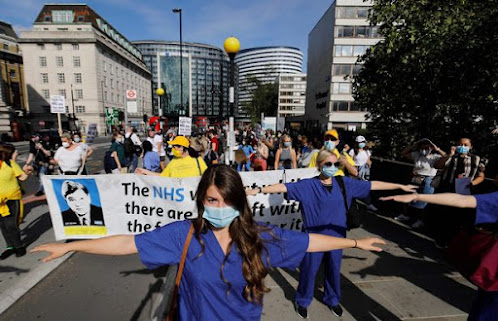 Health and care workers say this exposes the government’s true attitude toward them – in spite of public praise heaped on the NHS.
Unite national officer for health Colenzo Jarrett-Thorpe said said healthcare professionals had “reacted with anger to being overlooked”.
In real terms they have endured a 20% pay cut, he stated ahead of the demonstration. 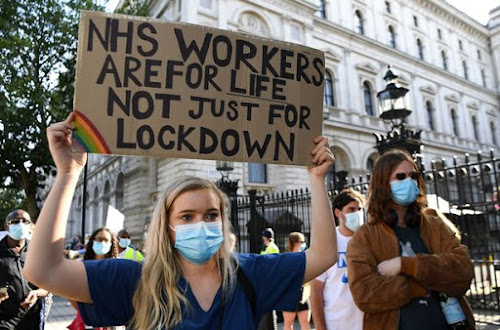 He continued: “This sense of anger was heightened, especially in light of their work and sacrifices during the global pandemic which has taken the lives of more than 500 NHS and social care staff across the UK.
“We are facing a perfect storm for recruitment and retention in the NHS – in a decade of Tory austerity, NHS staff have seen their pay cut by 20% in real terms and many are considering leaving the health service; at the same time, there are about 40,000 nursing vacancies in England alone.
“This crisis is also being exacerbated by the scrapping of the student bursary, which is putting off many who may have considered becoming one of the next generation of nurses.” 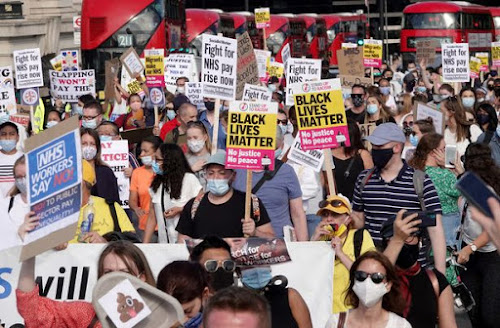 It comes despite public shows of gratitude to those on the frontline, Mr Jarrett-Thorpe said.
“What we have seen in the last few months is generous praise, warm words, and lots of Thursday evening clapping by ministers; yet we got a flavour of the government’s true feelings,” he said.

COVID-19: What Sanwo-Olu Said About Another Lockdown

Words can’t describe the remarkable life I’ve had with you – Daniel Ademinokan to wife...