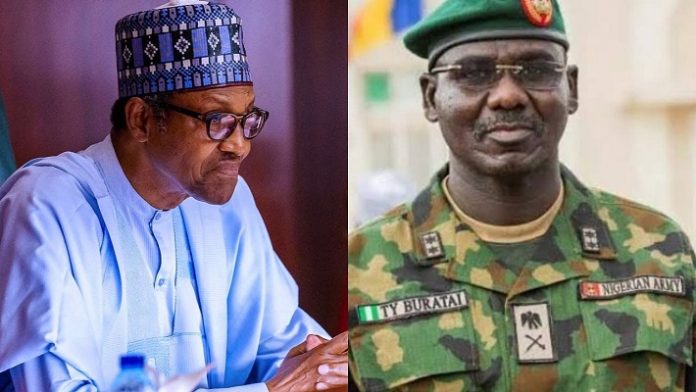 Buhari has sharply reacted To Buratai’s request to deploy soldiers for EndSARS.

CityNews Nigeria reports that President Muhammadu Buhari has rejected a request from the Nigerian Army to quell ongoing #EndSARS protests with soldiers.

According to Peoples Gazette ,Buhari reasoned such approach could backfire. Mr. Buhari said heavily armed soldiers with directive to open fire should be the last resort — if at all they’ll be considered — because of the spontaneous and elaborate nature of the ongoing pushback against decades police brutality, according to a presidency and two military sources briefed on the matter Wednesday night.

Our sources said Mr. Buratai and some of his generals are increasingly furious that #EndSARS protesters have refused to stand down.

He sought the president’s permission to deploy soldiers to disperse protesters and take over demonstration grounds in Lagos and Abuja, a senior administration official told the Gazette shortly after 11:00 p.m.

The official said Mr. Buhari fear that the protests could grow bigger if any attempt is made to use soldiers to violently suppress it.

“The president is wary of escalating the situation,” our source said. “He does not want this to backfire because there are many locations that protests are holding across the country.”

Chief of staff Ibrahim Gambari was amongst those who advised the president against troops deployment.

National security adviser Babagana Monguno did not take part in the meeting but a source said he would be briefed. The Gazette has yet to establish whether or not the NSA was briefed, and a telephone number for him did not immediately connect Wednesday night.

Mr. Buratai’s proposal followed a week-long demonstration that has refused to wane despite government acceding to some of the key requests from the protesters.

He also announced a new unit that would replace the defunct brutal squad.

Mr. Buhari in additional repeatedly assured that his administration would take police reforms more seriously, but urged protesters to embrace dialogue around a sustainable solution.

The protesters have declined to end the campaign until at least five fundamental issues that border on citizens’ rights and restitution thousands of SARS victims.

But top government and security appointees of the president are seething and “now itching” to do something immediately.

Their desperation followed several advises that they have given the president over the past week; including some without any form of law enforcement intervention.

A military source said the president and his key insiders are reluctant to take a straight position because they are still learning to understand the main actors of the protests.

“The president may still be asking for time to better understand the protesters first,” a military brass-hat told the Gazette. “But the president recognises that these categories of protesters are not the same as members of the Shiite sect.”