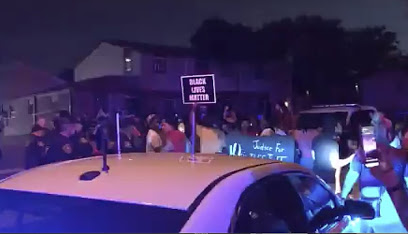 There have been clashes for a second night in Wisconsin, with buildings and cars set alight, following the police shooting of a black man on Sunday.

Jacob Blake, 29, is in a stable condition after he was shot several times as he went to a car and opened its door in the city of Kenosha.

Governor Tony Evers has called up the National Guard to aid local police.

The killing of black man George Floyd in Minnesota in May led to protests against racism and police brutality.

Demonstrations across the US and in many cities internationally put a spotlight on the treatment of African-Americans by US law enforcement and prompted a wider reflection on racism in society.

Video footage of the Kenosha shooting, taken from across the street and shared on social media, shows Mr Blake leaning into the car and an officer grabbing his shirt, with seven shots heard.