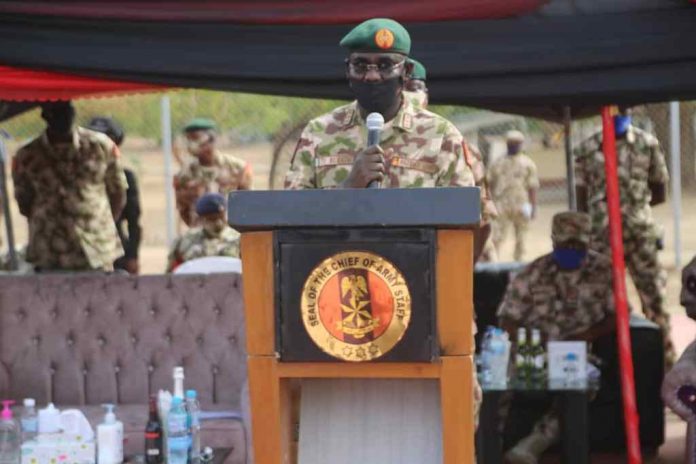 The Chief of Army Staff, Lt.-Gen. Tukur Buratai, has lauded the pace of infrastructure development at the Nigerian Army University Biu (NAUB) in Borno.

Buratai gave the commendation during inauguration of several projects at the university on Tuesday.

Others include ICT centre and the Maternal and Child Referral Centre and lecture theatre.

Buratai, who acknowledge the contributions of various governmental and non-governmental organisations in fast-tracking the development of the institution, said the university had witnessed tremendous development within its two years of existence.

He commended the intervention of the Tertiary Education Trust Fund (TetFund) in providing two faculties complexes for the institution to boost its academic strength.

READ ALSO:   JUST IN: Alaafin Of Oyo Does It Again, See What He Did For Queen Omowunmi

The COAS also lauded the efforts and support of Zenith Bank towards the construction and equipping of the university’s ICT centre as well as the Total Nigeria Ltd for establishing the health centre.

Buratai assured that the Nigerian Army would continue to invest in the university, adding that it was also designated as one of the barracks and cantonment of the Nigeria Army.

The Army Chief who earlier led members of the university governing council and top army officers on courtesy visit to the Emir of Biu, Alhaji Mustapha Aliyu, commended the emirate for their support.

He also expressed appreciation to the Emir for the cordial relationship between the university community and the people of the emirate council.

“The university has progressed so well so far and I am sure that it will serve the people of Biu emirate and the country as a whole.

“There are projects sponsored by the Tetfund and the university itself that are completed and would be commissioned and lay foundation for the worship centre,” he said.

The Vice Chancellor of NAUB, Prof. Kyari Mohammed, said the two faculties of Arts and Social Sciences complexes projects were funded by Tetfund from start to finish.

He added that other projects were funded by the federal government special grant and interventions from some private organisations.

He thanked the Executive Secretary of Tetfund, Prof. Suleiman Boforo, for his special interest in the university.

The projects were later inaugurated by the Tetfund boss and Buratai.

Insecurity: Nigerians know we have done our best – Buhari