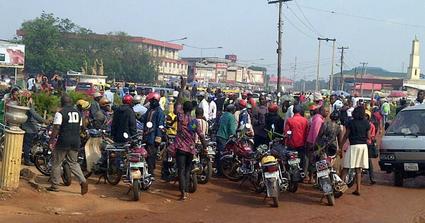 A commercial motorcyclist has died after he was hit by a stray bullet allegedly released from the gun of operatives of the Amotekun Corps in Oyo state.

CityNews Nigeria reports that motorcyclist operators have taken to the streets in Ibadan, Oyo state capital, to protest the alleged killing of their colleague by the State Security Network Agency popularly known as Amotekun.

The commercial motorcyclist, identified as Tosin Thomas, was hit by the stray bullet around 11pm on Wednesday, January 13, 2021.

Amotekun operatives were said to be on patrol around Mokola area of Ibadan when a gunshot was heard allegedly hitting Thomas, NAN reports.

According to a witness account, Thomas was rushed to the hospital for medical attention but later gave up the ghost in the early hours of Thursday.

The deceased was not on his bike at the time of the incident, the witness added.

This must have triggered the frustrations of other motorcycle operators in the area who trooped to the street to demand for justice for the alleged killing of Thomas.

The protesters carried the remains of the deceased around Mokola before they eventually dumped it in the middle of the road.

This resulted in a serious traffic around Mokola Roundabout and traders were forced to hurriedly close their shops for safety.

The State Police Public Relations Officer (PPRO), CSP Olugbenga Fadeyi, who confirmed the incident in an interview with NAN, also added that normalcy has been restored in the affected area.

The incident resulted in the death of seven people while houses were also burnt down.

Ondo Lawmaker Speaks On Why He Was Suspended By The Assembly

Finally, 25-year old man who killed four people over a period of nine months is...