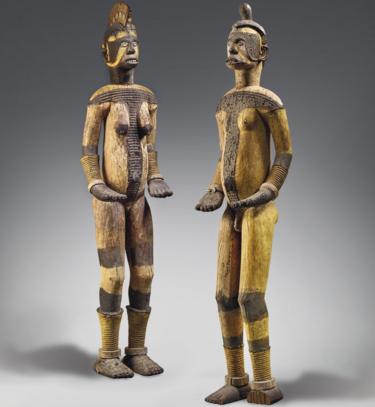 Nigeria is “saddened” by the sale of two sculptures belonging to the south-eastern Igbo community, an official from the Nigerian National Commission for Museums and Monuments, has said.

A prominent art historian had called on the renowned auction house, Christie’s, to cancel the sale.

Prof Chika Okeke-Agulu told the BBC the two objects were “looted” from shrines during the civil war in the late 1960s.

Christie’s rejected the claim that the sculptures were stolen, saying the Monday sale was perfectly legal.

The wooden objects about 1.5 metres high, one male and one female, represent deities from the Igbo community, their hands face upwards waiting to receive sacrifices and gifts.

Why is the sale so controversial?

Central to the controversy is when the statues were taken and where from.
“Christie’s ought not be dealing in Nigerian antiquities that were probably taken out at a time of conflict, contrary to the Hague Convention of 1954,” Babatunde Adebiyi, legal adviser for the Nigerian National Commission for Museums and Monuments, said, adding that Nigeria “was saddened” by the sale.
The Hague Convention of 1954 was adopted to protect cultural property in the event of armed conflict. Nigeria joined the convention in 1961.
Prior to this Nigeria already had an antiquities ordinance law which made the trade of stolen cultural artefacts illegal, which was adopted in 1953.

The 1970 Unesco convention also banned the international trade in stolen artefacts.
Mr Adebiyi, who also advises the Nigerian government, says he believes these objects will always belong to the people of Nigeria.
“There is never going to be a universal principle that says something made by my forebears belongs to you in perpetuity because you bought it in an auction house. African antiquities will always be African, just like a Da Vinci will always be European.”

Where did the items come from?

Prof Okeke-Agulu from Princeton University says the objects were looted from communal shrines in his native Anambra state, with the help of local conspirators.
He said they could not have been acquired legally because they were removed during the 1960s Biafran civil war, when the Igbo community attempted to secede from Nigeria.

“Growing up in Nigeria, we would pass by these destroyed and looted shrines and they would point to them, [saying] ‘these were the shrines that were looted and destroyed during the war,'” he told the BBC.

The historian believes the loss of these sculptures has meant that a key part of Igbo cultural identity has been lost for future generations. He accused Christie’s and other art collectors of “expropriation”.

“To pretend we don’t matter – what we think doesn’t matter – is for me a recast of the colonial arrogance that we are still dealing with in other parts of the African continent,” Prof Okeke-Agulu said.

Could there be another explanation?

But art historian Professor Clifford Nwanna, from Nigeria’s Nnamdi Azikiwe University, says that more information is needed.
He says that in the past some local people chose to throw away some ritual objects or sell them.
This sometimes happened when people felt the object “was no longer potent” or stopped working as protection.
Prof Nwanna also points to the arrival of Christian missionaries in the area as another reason historically why some local people rendered the objects “as things that don’t have much value”.
“Some people were persuaded to do away with their gods, idols, and those statues,” he adds.
He said the onus should be on the local community to call for the return of the items:
“They need to make a claim for the objects… because legally the community are the people that have the highest interest.”

What does Christie’s say?

It has defended the auction.
“The auction house believes there is no evidence these statues were removed from their original location by someone who was not local to the area, or that the area they came from at the time they were acquired was part of the conflict at the time,” it said in a statement.
“Our understanding is that even prior to the conflict, local agents were trading in objects such as these and they were starting to circulate more widely,” it said.
It added that at no stage “has there been any suggestion that these statues were subject to improper export”.

How did the sculptures get to Paris?

According to Christie’s, the sculptures were acquired by Jacques Kerchache, a French art collector and a close adviser to former French President Jacques Chirac.
But the auction house says it believes Mr Kerchache didn’t travel to Nigeria in 1968/69 which suggests local agents were involved in initial trading, probably to Cameroon before shipment to Europe.