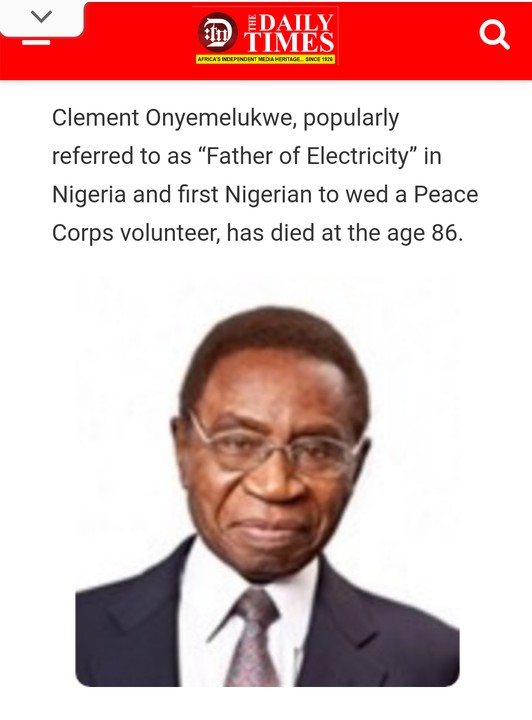 Onyemelukwe, Nigerian Chief Electrical Engineer of the country’s Electricity Corporation, generated international attention when he married Catherine Zastrow, a white Peace Corps volunteer, who had just completed her service in 1964.

Although his parents had rejoiced that, he had returned from nine years in the United Kingdom without a foreign white wife, in 1963 he met Catherine in Lagos where they got married.

“Peace Corps Worker to Wed Nigerian Engineer,” was the headline for a brief article in The New York Times from Lagos, Nigeria on Dec. 23, 1964.

Onyemelukwe initiated the planning and development of the electricity grid still used in Nigeria today when he became Chief Electrical Engineer in 1962.

He left the electricity industry to found Freeman Engineering in Lagos in 1973. In 1976 he founded Colechurch International Ltd, a project management and promotion company, in United Kingdom.

He and his wife Catherine moved to Westport in 1993.

He initially held a residence card, known as a “green card,” as he was spending a good part of his time in his home country Nigeria on business.

In 2007, he finally became an American citizen. He was a speaker at the Y’s Men and an active library user while working on his latest book or researching business ideas.

His wife Catherine was president of the library board in 1999-2000, prior to becoming the Director of Development for the YMCA. She is an active member of TEAM Westport and The Unitarian Church in Westport.

Onyemelukwe died January18, 2020 in his home in Westport of lung cancer.

According to a family statement, his life will be celebrated on March 7, 2020, at 1 p.m at the unitarian church in Westport.

The statement added that Onyemelukwe would be buried in the family compound in his ancestral village beside his parents in April.

He is survived by his wife Catherine, three children namely: Chinakueze, Elizabeth, and Samuel, and five grandchildren, Kenechi, Nkiru, Teya, Bruche and Ikem, a brother and three sisters.

Odumakin: The Man Who Made Life A Living Hell For Bola Tinubu