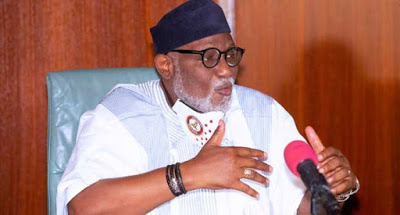 January 13 next year has been fixed for delivery of judgment in suit challenging the legality of Rotimi Akeredolu as governor of Ondo state.

Citynews Nigeria Olajumoke Anifowose, a former governorship aspirant of the All Progressives Congress (APC) during the last election in Ondo State, in a suit marked: FHC/ABJ/CS/881/2020 is seeking the removal of Akeredolu.

Justice Inyang Ekwo of federal high court in Abuja fixed the date after hearing the final arguments from lawyers representing parties on Monday.

Defendants in the case are Akeredolu, the APC and the Independent National Electoral Commission (INEC).

Mrs. Anifowose is, among others, challenging the outcome of the July 20, 2020 governorship primary election conducted by the APC, which produced Akeredolu as the party’s candidate..

Plaintiff’s lawyer, Adesina Oke adopted all the processes he filed for his client and aksed the court to strike out the objections raised by the defendants.

Oke urged the court to settle all the issues raised in the suit and grant the reliefs sought by his client.

Lawyers to Akeredolu and the APC, Akin Olujinmi (SAN) and Lateef Fagbemi (SAN) urged the court to uphold their objection to the competence of the case and dismiss it.

They argued that the case was wrongly commenced when the plaintiff sued the Governor of Ondo State as against suing Akeredolu in his personal capacity since the case was about his Candidacy.

Olujinmi argued that the plaintiff move to correct the error in the suit by filing an amended originating summons came late as it was done 50 days after the cause of action, outside the 14 days allowed by the Constitution.

A brave man is gone – Tinubu pays tribute to Fasanmi

Just In: Governors Give Buhari Conditions For Relaxing Lockdown On Monday