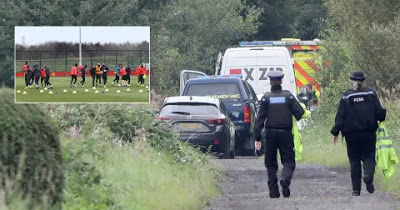 The body of a young man has been found in woodland close to the Manchester United training ground.

The man, who is believed to be in his 20s, was discovered on Thursday morning close to the Aon Training Complex in Carrington, Greater Manchester.

Emergency workers, including an air ambulance, were called to the scene just before 11am.

A Greater Manchester Police spokesman said: ‘Shortly before 11am, police were called to a report that the body a man had been found on land in Carrington.

‘Emergency services attended and sadly found the body of a man believed to be in his 20s.

‘There are believed to be no suspicious circumstances.’

In a statement, the North West Ambulance Service said: ‘We got a call just after 11am this morning.

‘We sent a number of resources to the scene including an ambulance, two rapid response vehicles and an air ambulance.

‘We did not take anyone to hospital. This is a police incident.’