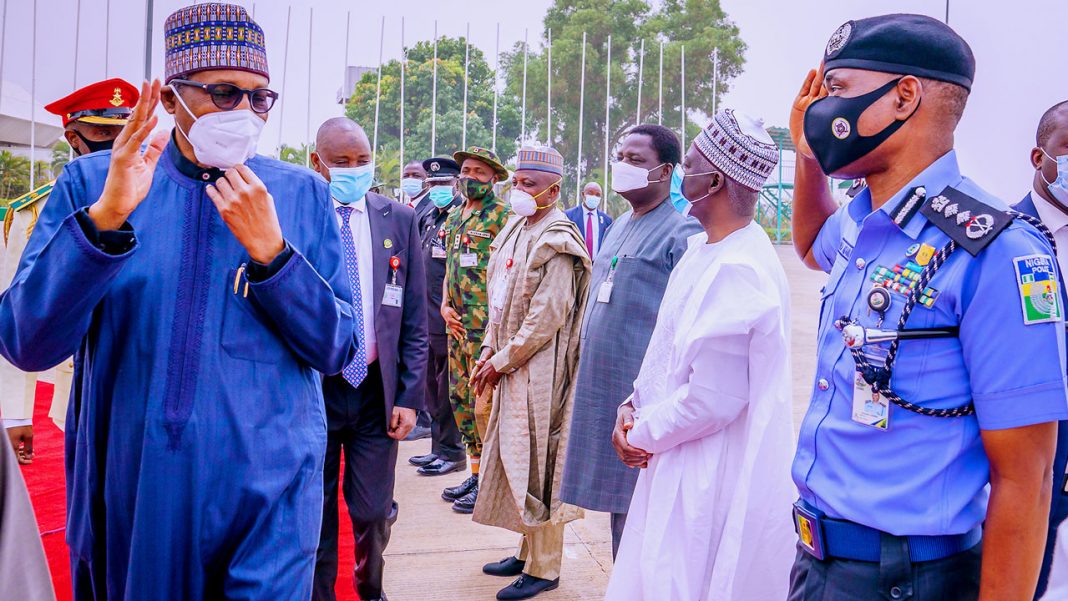 CityNews Nigeria reports that almost two years after his last private trip to the United Kingdom (UK), President Muhammadu Buhari, yesterday, jetted out of the country on a medical trip to London for the sixth time since he was sworn into office in 2015.

The president and some aides departed the Presidential Wing of the Nnamdi Azikiwe International Airport Abuja, for the London ‘routine’ medical check-up around 2:30 p.m. Those at the airport to bid the president farewell included the Chief of Staff to the President, Ibrahim Gambari; Minister of the Federal Capital Territory (FCT), Muhammed Bello; Inspector-General of Police, Muhammed Adamu and other presidential aides.

Before departing the Presidential Villa, Buhari had met behind closed doors with security chiefs, where he directed them “to fish out and crush heads of bandits, kidnappers and their local collaborators to restore confidence in the society.”

The president’s trip has expectedly elicited reactions from Nigerians over the deplorable state of healthcare system with experts saying the country could be losing more than N576 billion ($1.2 billion) yearly to medical tourism.

Nigerians have for decades suffered from an inadequately funded healthcare system, squalid clinics and hospitals, and poorly paid and overworked healthcare workers who frequently move abroad for employment. There are at least 8,178 medical doctors of Nigerian origin working in the U.K., according to data on the U.K. General Medical Council website. The exodus has worsened healthcare in a country that has one doctor for every 5,000 people, according to the Nigeria Medical Association (NMA).

It would be recalled that President Buhari had in 2015 promised to stop medical tourism and save the nation scarce foreign exchange if elected president. In fact, he promised to ban elected government officials from foreign medical trips after he rued the millions of dollars expended on medical tourism.

Before the dawn of COVID-19 last year, reports suggested that almost 5,000 people leave the country monthly for various forms of treatment abroad. However, The Guardian investigation revealed that the rate of medical tourism reduced drastically since January 2020 due to the outbreak of the pandemic and the travel restrictions that followed.

Defending the trip, presidential spokesman, Garba Shehu, said President Buhari began his yearly medical trip to London even before he came into office as Nigeria’s president in 2015. Shehu said this yesterday while addressing newsmen at the departure wing of the Nnamdi Azikwe International Airport, Abuja, just after his principal departed the country for medical check-up.

He said: “The President is looking at the window of opportunity that has opened with the Easter holiday. It’s a much relaxed period for everyone – Good Friday, Easter Monday, National Holidays. Then, he will use that period for his regular medical check-up.

“This is something he has done for so many years even before he came to office. Every year, he had appointment with his doctors and he went there to do it. The only anomaly this time around is that COVID prevented this kind of thing to hold in 2020. So, he has lost some period. The last time he was there was one and half years back.”

The president is due back in the country in the second week of April. Buhari is embarking on the medical trip at a time members of the Nigerian Association of Resident Doctors have declared their intention to commence strike action on April 1.

According to the National Association of Resident Doctors (NARD), about N576 billion ($1.2 billion) is lost to medical tourism yearly in Nigeria, an amount that could have been invested in the development of the country’s health care system and the country as a whole. This is about N100 billion less than the N632.7 billion allocated to the health sector in the 2021 budget.

Also, a Price Waterhouse Coopers (2016) report states that Nigerians spend $1 billion annually on medical tourism with 60 per cent of it on four key specialties namely: oncology, orthopedics, nephrology and cardiology. This is nearly 20 per cent of the total government spending on public health sector for the year including salaries of all public sector doctors, nurses and other healthcare workers as well as other health programmes like malaria, tuberculosis, polio and Human Immuno-deficiency Virus (HIV)/Acquired Immune Deficiency Syndrome (AIDS) prevention.

Some of the remedies to the problem as suggested in the paper include: adequate funding of the system, improved health care facilities, better remuneration and motivation for health workers, government intervention on the battle for supremacy among health workers, immediate ban of government sponsored medical trip abroad, adequate training, enforcement of legal action against medical negligence, improved medical research and encouraging foreign investment.

Meanwhile, despite widespread debate of Mr. President’s visit to UK, medical doctors are divided on whether it is appropriate or otherwise after the country spent huge sums of money recently to refurbish the Aso Rock clinic. In its 2021 budget, the president allocated its highest amount ever to the State House including the ‘presidential wing’ of a hospital the president seldom uses, where N17.3 billion will be spent to run the State House, Nigeria’s seat of power.

While the apex body of medical doctors in Nigeria, the Nigerian Medical Association (NMA), says Mr. President has the right to choose where to get treated, the radical body of medical doctors, NARD, says Buhari’s trip is a waste of scare foreign exchange and it is encouraging brain drain. They are, however, unanimous that Nigeria can reduce the unemployment indices drastically by investing heavily on health.

President, NMA, Prof. Innocent Ujah, said that: “I don’t have any problem with Mr. President going abroad for medical treatment. What I will not support is he going there for malaria treatment. Besides that, the President has the right to choose where to get treated.”

Ujah, however, urged the Federal Government to meet the demands of resident doctors to avoid another industrial action that could shut down the health sector. “These doctors are suffering. Despite all the risk they are taking treating patients, they are being owed. That is not fair. A labourer deserves his or her wages. They have exhausted other avenues to get their demands and strike has become the only option,” the NMA President said.

President of NARD, Dr. Uyilawa Okhuaihesuyi, posits that: “Truly what is the state of the Villa clinic? What is the state of all the monies been budgeted yearly for the clinic? This tells you no one is accountable. If things have been normal, no commander in chief will travel for a ‘routine’ medical check-up. If we are in a saner nation, the medical specialty the Commander In Chief (CIC) needs would be deployed there. But no one has been deployed. I can almost as a matter of fact tell you that the lead physician who the CIC sees is most likely a Nigerian who relocated for greener pastures to save his sanity.”

On threat to begin strike tomorrow (Thursday), Okhuaihesuyi said: “The Nigerian Association of Resident Doctors after an extraordinary National Executive council has decided to embark on an industrial action owing to persistent neglect of the health institution as well as the welfare of the persons working round the clock to ensure health is given to our people.

“The government has over the past 20 years reneged on all its terms of settlement with doctors whilst the doctors have once again been made to carry on despite poor working conditions with hearts laden with pain. If the Aso Villa clinic was working at top quality backed with good remuneration they would have top class physicians there delivering top quality service but again it’s not the case. The clinic is just in the name, nothing to show for it.”

On why Nigerian doctors still leave for greener pastures abroad, the NARD President said the major tripod of emigration of doctors are: poor working condition; insecurity; and welfare. Okhuaihesuyi said these top three, the world over, make for doctors emigrating.

“As we speak Nigeria has no three star government-owned tertiary health institution. How many radio oncology centres do we have, yet we have expertise but our patients die physically and mentally after long waits for radiation therapy. Can you walk into any health facility in Nigeria today and get sorted out easily? We are still moving at a snail pace while other nations of the world are miles ahead,” he said.

Globally, medical tourism has contributed immensely to the growth and development of healthcare system and countries engage in it because it attracts people from various parts of the world, thereby adding value to the countries involved. In the United States for example, over 60,000 medical tourists were attracted to the country in 2008, while in the year 2012, Jordan attracted 250,000 international patients accompanied by more than 500,000 relatives generating well above $1 billion income from medical tourism that same year. There is no record of medical tourists coming to Nigeria.

Meanwhile, the Peoples Democratic Party (PDP), yesterday, asked President Muhammadu Buhari to admit that his administration has failed to make impact in the healthcare system. The party, in a statement by its national publicity secretary, Kola Ologbondiyan, noted that the routine overseas medical check-up by the President is a direct indictment of his presidency over its failure to fix the healthcare system.

The party said it is worrisome that under President Buhari, even the hitherto highly rated State House Clinic, has become so moribund that it can no longer provide a simple medical check-up service for Mr. President.

“While the PDP has nothing against where any person, including President Buhari, seeks his or her medical services, our party is worried that the Buhari presidency is taking no decisive steps to fix our health care system, ostensibly because Mr. President can afford overseas medical treatment at tax payers’ expense,” the statement added.

Also, the Human Rights Writers Association of Nigeria (HURIWA) has described as shameful and regrettable the decision of President Buhari to continue to travel to London at serious costs to the taxpayers to take care of his personal health needs. The rights group said the unwise choice of the President to patronise foreign health service providers in total rejection and disregard for the Nigerian indigenous health service professionals has shown that his administration is hypocritical about achieving any kind of mileage in the area of rebuilding the near moribund health care sector of the nation’s economy.

“The continuous patronage of foreign medical services by President Muhammadu Buhari and members of his immediate family is a categorical message that the president, Muhammadu Buhari, may be unwilling to bequeath enduring and sustainable legacies in the areas of building enduring and strategic health infrastructures, which should put to an end to the wasteful ventures of tourism by government officials who fritter scarce foreign reserves to service their personal health challenges at public costs abroad.”