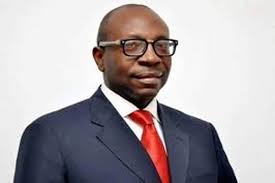 Pastor Ize-Iyamu, a former Secretary to Edo State Government (SSG) has debunked reports that he has received an endorsement from the All Progressives Congress (APC) National Chairman, Adams Oshiomhole, National leader Asiwaju Ahmed Bola Tinubu and President Muhammadu Buhari to contest the election.

Ize-Iyamu who spoke to newsmen after he picked his nomination form at the party’s national secretariat in Abuja, said he was endorsed by seven other intending aspirants who stepped down for him.

Recall that Pastor Osagie Ize-Iyamu, on Tuesday emerged as the All Progressives Congress (APC) consensus candidate for the state governorship election.

Ize -Iyamu emerged the APC candidate through a consensus arrangement on Tuesday night in Abuja.

He was presented by the chairman of the screening committee, Senator Francis Alimikhena, the representative of Edo North Senatorial District.

According to him, “direct mode of primaries is the best method under the current deadly health coronavirus pandemic.” the Sun quoted him as saying.

US: President Trump says China ‘will do anything’ for him to lose election

Obiano Suspends 12 Traditional Rulers In Anambra Who Travelled To Abuja