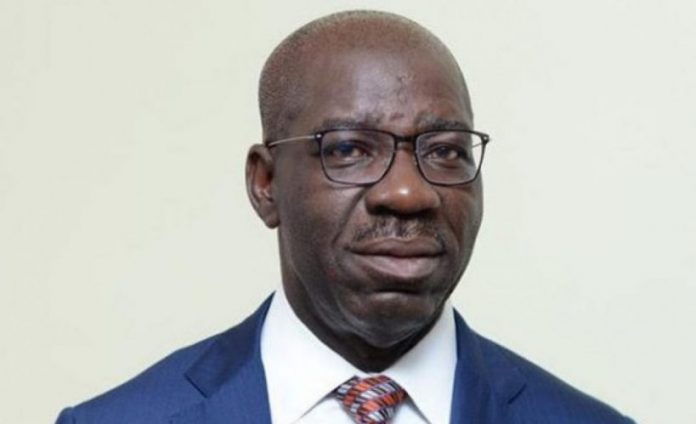 Edo State Governor Godwin Obaseki will on Tuesday meet with President Muhammadu Buhari on the controversy surrounding the mode of primary to be adopted by the All Progressives Congress (APC) in Edo state.

However, Governor Obaseki said as the Chief Secu­rity Officer of the state, he was opposed to the idea of direct primary now because of the COVID-19 pandemic in the state.

The governor, who spoke through Crusoe Osagie, his Special Adviser on Media and Communi­cation Strategy, said as an extremely popular candi­date, he was not afraid of any mode of primary and would defeat any aspirant who slugged it out with him for the APC ticket.

According to him, gath­ering together over 500,000 party members in the name of primary may trigger the number of COVID-19 cases already in the state, a situa­tion he said would put more lives at risk.

“The Governor of Edo State and leader of the APC in the state, Governor God­win Obaseki, is an extreme­ly popular candidate who will defeat any aspirant that contests the party’s ticket in whatever means of primary that is used.

“The question we should ask is, ‘Is direct primary the better alternative now in the midst of this COVID-19 pan­demic?

“Governor Obaseki, as a responsible citizen and Chief Security Officer of Edo State, will not take any action that will put the health and safety of the good people of the state at risk. That is why we are op­posed to the idea of direct primary at this period.”

Also speaking, Hon. Paul Ohonbamu, the Edo State Commissioner for Communication and Orientation said it is erroneous for some people to claim that Governor Obaseki is unpopular which explains why he was opposed to the direct primary method.

According to him, it is unfair for Oshiomhole to preside over the selection of the party’s governorship candidate, having publicly shown that he is desperate for Governor Obaseki not to be reelected.

“The governor of Edo state is not afraid of direct primary. He is ready for any form of the primary. The constitution allows for either direct, indirect or consensus which was used to bring Oshiomhole back for his second term.

“But this time, they are saying consensus is undemocratic but when it was used for Oshiomhole, it was not undemocratic. Now that it is Obaseki’s turn, it becomes undemocratic. You can see how they are propagating two moralities.”