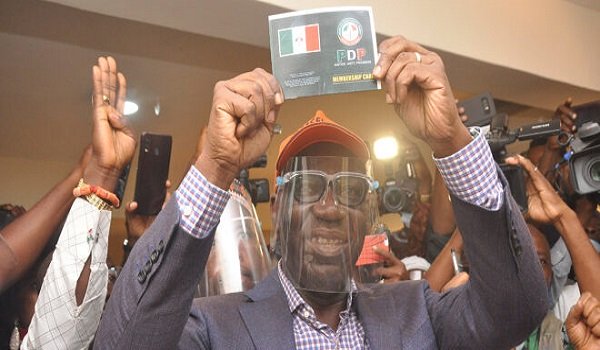 Some entrenched forces within the Peoples Democratic Party (PDP), Edo chapter, have become disgruntled with how Governor Godwin Obaseki was accepted into the party without “due consultation”, investigation has revealed.

Obaseki, who joined the party last Friday following his disqualification by the ruling All Progressives Congress(APC) from its primary on the basis of “defective qualifications”, was received by the chapter chairman, Dr Tony Aziegbemi, in a carnival-like atmosphere in Benin.

But despite the warmth with which the Governor was received, it was gathered many stakeholders in the party are displeased he joined without them being carried along. While they considered the Governor’s defection to the party as a welcome development, they expressed strong reservation over how it happened.

To further fuel the resentment, they pointed out Obaseki’s welcome remark was anything but assuring. The governor, immediately after defecting to the party, said: “I know that upon taking up membership of this party, I automatically become the leader of the party in the state. That is the constitution; I read it thoroughly last night (Thursday).

A strong stakeholder confided in our correspondent that Obaseki’s pronouncement confirms he was imposed on them by National Working Committee (NWC) members and PDP governors.

“What he said was very revealing and disturbing. Who joins a party and automatically becomes the leader? Even if that is what will be, Obaseki should have been more discreet.

“It shows he is coming to the party to displace those who have worked for years to build the structure. He is going to plant his people everywhere, thereby suffocating those who have toiled for the party even in opposition,” he lamented.

The governor, another stakeholder pointed out, has shown he is not a team player. “It is just about him and his ambition. It is not about the party structure. He simply wants to use our platform to fulfil his ambition and move on. This is a great danger that will boomerang for the party,” he stressed.

Checks revealed those who have been working vigorously for PDP in Edo feel alienated by Obaseki’s defection. A former executive member recalled how immediate Edo PDP chairman Dan Orbih and his team battled the ruling APC to a standstill at the last general elections.

Orbih led PDP to win four of the nine House of Representatives slots at the last National Assembly elections. The PDP won two of the three senatorial seats despite facing a ruling party with federal machinery. At the 2016 governorship poll, PDP made a strong statement by garnering 253,173 votes to APC’s 319,483.

All of these, the source stated, leave no one in doubt that Orbih led PDP to a good showing despite facing a ruling APC. “So, to give Obaseki the impression he is coming to help us is false because if not for federal power, PDP routed APC in 2016. Rather, he is the one that needs us. The notion that he is a big fish is just nothing but guesswork,” another key stakeholder stated.

It was learnt the growing resentment may affect the second term bid of Obaseki and more importantly the party’s future in Edo as long-standing members feel sidelined and unappreciated. Many of them, sources said, may not work for the party in the September 9 governorship poll.

They feel Obaseki has come to PDP with a lot of baggage, which made the APC disqualify him. “Our party feels we will just win by fielding Obaseki as a sitting governor but it is not true. Look, APC knew why they rejected him.

“He hasn’t sorted out his qualification issue. Supposing he even manages to win, do you think the APC won’t catch in on that to file suits against him? Where will that leave us as party members and stakeholders?” another stakeholder informed.

Also, screened governorship aspirants have vowed never to step down for Obaseki. Kenneth Imasuagbon spoke the minds of his co-aspirants when he said: “The contemplation of me stepping down is preposterous. You can’t ask me to step down after my (political) struggle for the past 16 years.

“Why? How do I explain that to the people who laboured for me in the past 16 years? Even in the dream, I can’t have such a thought.

“Nobody should reach out to me. That is of no value to me. There is no advantage to him (Obaseki). Let there not be intimidation or any form of manipulation of the process by the leadership of the party at the national level.”

A key stakeholder said: “Obaseki should just pipe down. He has to acknowledge he cannot win alone. He needs everyone on board to be able to use the party structure well. If he thinks and acts otherwise, it will spell doom for him and the party.”

From all indications, the days ahead appear turbulent in Edo PDP as its internal cohesion is tested with the arrival of a former foe, Obaseki. Will there be a rumble? Time will tell.

OMG!Colombian transgender shares pix of her husband’s eight-month pregnancy as they prepare to welcome their...

Lawyer Sues CBN Over Arabic Letters On The Naira