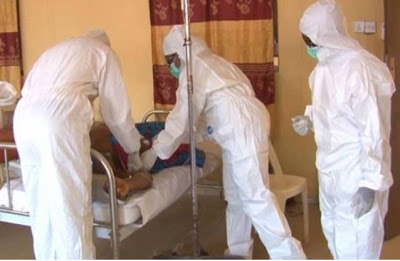 The government said the three new COVID-19 cases were among those infected with the virus by the now late 29-year old pregnant woman.

The pregnant woman was earlier reported to have sneaked into the state from Lagos, but later died of the complications arising from the virus after she was delivered of her baby.

The State Commissioner for Health and Human Services, Dr Mojisola Yahaya-Kolade, disclosed this in a statement in Ado Ekiti.

“We can confirm that three of the samples sent to the NCDC accredited laboratory for testing returned positive results of the COVID-19 virus infection.

READ ALSO:   Prophet Joshua Iginla Vows To Take Covid-19 Vaccine, Says it's Not The Mark Of The Beast Video)

“The samples were from three of the primary contacts of our third case – the late 29-year-old mother who died of complications from childbirth on April 22, 2020,” she said.

According to her, the new positive cases are all females, with ages ranging from 26-50 years and who had been in self isolation for 14 days now.

“This brings the total confirmed cases in Ekiti State to 11 out of which eight are active, two discharged, with one death recorded, ” she said.

It would be recalled that the government had, in the previous weeks, announced that the late 29-year-old woman came in contact with over 70 persons during the course of her visits to about three hospitals before the delivery of her baby through Casarean.

READ ALSO:   #EndSARS: Nobody Died At Lekki, Those Who Claimed They Saw Corpses Have Eye Problem – Buratai Kicks

She later died at the Federal Teaching Hospital, Ido Ekiti and was subsequently buried under strict supervision of state government officials.

Among COVID-19 victims traced to her case is a 45-year-old medical doctor from a private hospital in the state.

Dubai Women Arrested After Stripping To Pose Naked For ‘Stunt’