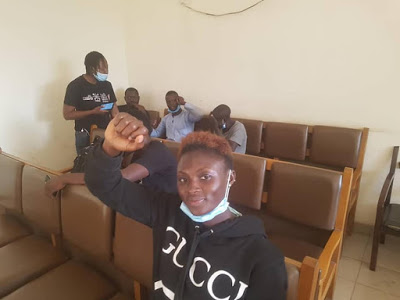 Chief Magistrate in the Federal Capital Territory (FCT), Musa Eneye has granted bail to six #EndSARS protesters in the sum of N50,000 each with one surety each in like sum.

The six protesters who were arrested while wearing #RevolutionNow T-Shirt during the protest in the front of the National Assembly are Olutosin Adeniji, Yasidu Bashiru, Abdulsalam Zubairu, Kabiru Garzali, Paul Akinwumi, and Devour Chomo.

The protesters who pleaded not guilty to the charges were arraigned on Friday, November 6, 2020, by the FCT Commissioner of Police on charges of criminal conspiracy, unlawful assembly, and inciting public disturbances contrary to Section 97 of the Penal Code.

Although the bail applications with the affidavit evidence were said to have been served on the legal department of the FCT Police Command, no legal representation was made or reasons adduced for their absence.

The magistrate, Abdurazak Eneye, ordered that the sureties must deposit the N50,000 bail sum at the court registry.

He also ruled that the surety to be presented by each of the defendants must be Nigerian citizens with a verifiable means of identification.