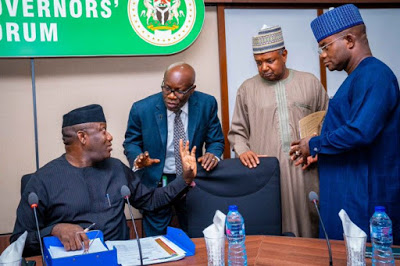 South-west governors and monarchs have bemoaned the composition and arrangements of the Nigeria’s security architecture.

Subsequently, they have called on ofPresident Muhammadu Buhari to rejig the nation’s security apparatus.

The leaders made the call at an event hosted by south-west governors in Lagos on Sunday,

This call is coming in the wake of the #EndSARS protests that rocked the country whose aftermath led to widespread violence and looting, particularly in Lagos state.

Buhari, represented by Ibrahim Gambari, his chief of staff, pledged to address the root cause of the protest.

After the meeting the forum issued a communique which read: “The security architecture of the country requires adjustment to adequately address the threats and realities of insecurity in the country. There should be more police presence in communities in the south-west states.

“A comprehensive programme that addresses youth employment and empowerment should be prioritised. Closer coordination and complementarity between the States and the Federal Government.

“Curricular of tertiary institutions should be reviewed, with emphasis placed on skills acquisition and entrepreneurship.

“We recognise the damaging and negative impact of fake and false news, and we worry about its destructive and dangerous potency. We call on the Federal Government to use the instrumentality of existing laws and regulations bench-marked from other countries to provide safeguards against the spread of fake news. The 2015 Cyber Act must also be fully used.”

The president said the political class must go beyond lip service and equip young people with skills that would make them competitive.

“Before our very eyes, what started as a peaceful demonstration turned to different thing that became a threat to all of us, who are regarded as elite,” he said.

“What we witnessed in the violence showed that something needs to be done to address the underlying issues and come out with solutions. We must be able to sustain the peace in our region at all cost.

“The vice-president and governors are designing an engagement framework through the National Economic Council that will be rolled out across States of the Federation.

“Chief among them is police reform across all its dimensions. Community policing as an additional layer that can resolve some of our security issues.”

Adeyeye Ogunwusi, Ooni of Ife, expressed unhappiness over the failure of the political class to consult with traditional institutions in decision-making.

The Ooni said dialogue would bridge the gap of communication between political leaders and traditional rulers.

Also speaking, Lamidi Adeyemi, Alaafin of Oyo, blamed the “unitary system” for the violence that occasioned the protests against police brutality.