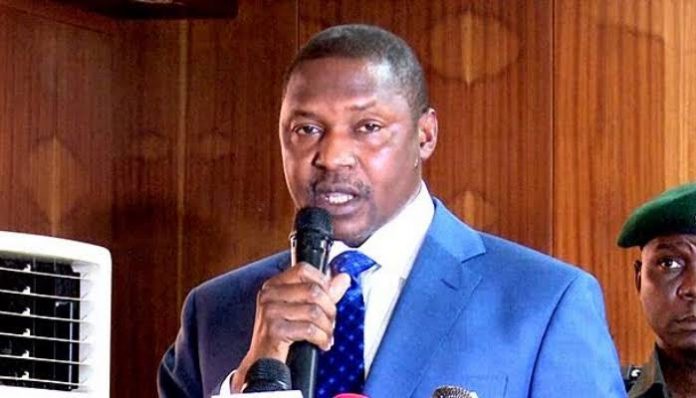 The Attorney-General of the Federation and Minister of Justice, Abubakar Malami has stated that 33 operatives of the now-disbanded Special Anti-Robbery Squad (SARS) indicted in 2019 by a presidential investigative panel can’t be prosecuted.

Explaining why the former SARS operatives can’t face prosecution, the report observed that the cases brought against the ex-operatives does not meet standards for it to proced to prosecution stage as no proper investigation was conducted.

According to Punch who quoted a top police source, the AGF said the report “does not meet prosecutorial needs” as it was said to be lacking in vital exhibits, such as “medical evidence and statements of the suspects”.

“The report of the panel does not meet prosecutorial needs. No proper investigation was concluded in all the cases. Admissible evidence such as exhibits, medical evidence, statements of the suspects and witnesses that can be used in court have not been obtained or recorded in the appropriate sheet from the suspects and witnesses by the appropriate investigation team.”

The report added that for the AGF’s office to be able to prosecute the cases, the affected officers must be made to undergo disciplinary actions and dismissed from police service where necessary, while the IGP should set up a special team to further investigate the individual cases.

It noted that after this has been done, prosecution can then begin either at federal or state levels depending on the outcome of the investigations.

“The indicted officers should be made to undergo disciplinary actions immediately and dismissed where appropriate.

“That the IGP who is well aware of the sensitivity of the matter should be advised to set up a special investigation team to conduct a thorough investigation into the individual cases.

“That after thorough investigation, the cases that are federal offences or fall within the FCT will be prosecuted by the office of the HAGF while those that are state offences will be transferred to the respective states for prosecution,” the report noted.