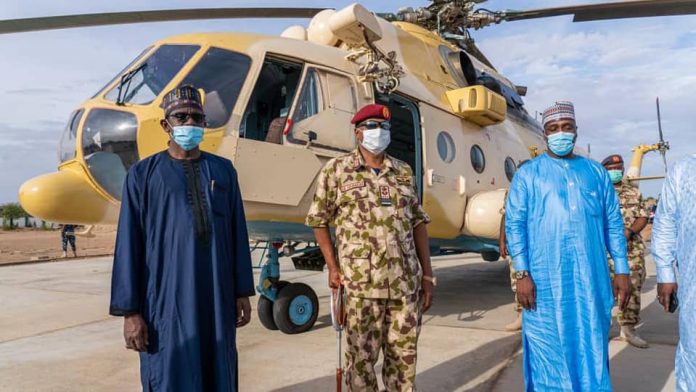 In order to further boost the response capability of the Air Task Force (ATF) of Operation LAFIYA DOLE to threats in Yobe State, the Nigerian Air Force (NAF) is set to establish a virtual Forward Operating Base (FOB), with a helipad and refueling facilities, in Damaturu, the State capital. This was made known by the Chief of the Air Staff (CAS), Air Marshal Sadique Abubakar, yesterday, 25 May 2020, while on an inspection of the facilities in Damaturu. This is just as the Yobe State Governor, Honourable Mai Mala Buni, who later accompanied the CAS on the inspection of the helipad, commended the NAF and the ATF for their immense contributions towards ensuring a gradual return to normalcy in the State.

In his remarks at Government House Damaturu before the inspection, Governor Buni said the fact that the Eid-el-Fitr Celebrations were marked in relative peace was as a result of the bravery and commitment of NAF pilots who not only conduct daring air raids on terrorists’ locations to destroy their facilities and neutralize their fighters but also respond speedily to distress calls to support their comrades fighting on land when locations in the State are under attack. He said Yobe State would remain indebted to the NAF for such commitment and would therefore continue to support all initiatives of the Service to enhance its capacity to respond to any threat in the State. Governor Buni equally thanked the CAS for his support in the realization of the Damaturu International Cargo Airport project, which he said would witness its first test flight on Friday, 29 May 2020.

Earlier in his remarks, Air Marshal Abubakar, appreciated Governor Buni for his personal commitment and tireless efforts that had facilitated the speedy execution of the helipad project. He noted that the enhancement of NAF facilities in Damaturu would reduce reaction time and ensure greater effectiveness and efficiency in mission accomplishment. He said this would even make it easier for the ATF to sustain the surveillance of the Maiduguri – Damaturu Highway which had brought some level of succour to commuters. The CAS said the NAF, working in synergy with sister Services and other security agencies, would maintain the tempo of operations with a view improving security in Yobe State.

The CAS, who was accompanied on the visit by Branch Chiefs and Directors from Headquarters NAF as well as the Commander ATF, has since returned to Abuja.