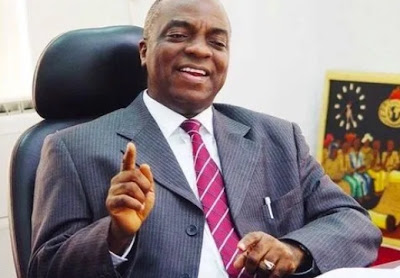 Bishop David Oyedepo of the Living Faith Church, a.k.a Winners Chapel, has issued a stern warning against another closure of churches in Nigeria as a result of a pandemic.

Oyedepo, who has always questioned the closure of churches, warned on Sunday that fire will fall the next time anyone tries to close down churches.

Recall that the Cleric had claimed that the “voice of darkness” influenced the ban on gatherings in churches.

He said: “God made us smarter than our enemies and we have not been fooled.

“It is only in this church that we heal COVID-19 patients, the government would not have asked me if they should close down the church.

“The next time anybody attempts to close down the church fire will fall.”

Oyedepo added that very soon the world will realise that they have been fooled by the devil.

“Very soon the world will come to a point where they would say we have been fooled because the devil that is fooling the world has the capacity but thank God we in this church have not been fooled,” he said.

This is coming after the Lagos state government announced opening of churches, mosques and restaurants in the state as from August 7th, 2020.