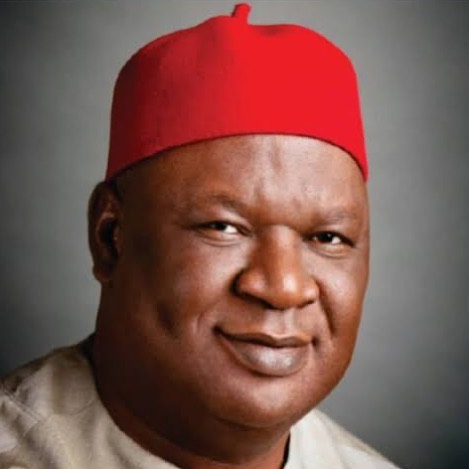 Former Secretary to the Federal Governmnet of Nigeria, Anyim Pius Anyim is 60 today.

Here’s all you need to know about him.

Anyim Pius Anyim (born 19 February 1961) is a Nigerian politician who served as the President of Nigerian senate and was Secretary to the Government of the Federation (SGF) during Goodluck Jonathan presidency. He was elected Senator on the People’s Democratic Party (PDP) platform in 1999 for the Ebonyi South constituency of Ebonyi State. He was elected Senate President in August 2000.

Background
Anyim was born on 19 February 1961 in Ishiagu, a dominantly Catholic community in the Ivo Local Government Area of Ebonyi State. He attended Ishiagu High School (St. John Bosco), the Federal School of Arts and Science, Aba and later, Imo State University, Uturu (1983–1987). For his Youth Service he served as the Co-ordinator, Youth Mobilisation Programme in Sokoto State. In 1992, Anyim became the Head of Protection Department at the National Commission for Refugees, Abuja, a job that included provision of legal services and political protection for refugees. In this capacity he traveled to various parts of the world.

In 1998, Anyim joined the United Nigeria Congress Party (UNCP) and won a Senate election. However, the death of General Sani Abacha on 8 June 1998 nullified the result. During the transitional regime of General Abdulsalami Abubakar he joined the People’s Democratic Party (PDP), and again ran successfully for election to the Senate in 1999.

Senate Career
Anyim took office in the Senate in May 1999, and was elected President of the Senate in August 2000, after Chuba Okadigbo had been impeached, holding office until May 2003.

In May 2001, Anyim declared that the upper legislative house was justified in probing the activities of the Mines and Power Ministry during the tenure of Chief Bola Ige. In June 2002, an attempt led by Anyim to impeach President Olusegun Obasanjo collapsed. Speaking a year later, Anyim said President Olusegun Obasanjo misunderstood him on certain issues but there was no conflict between them. In August 2002, he said he was opposed to all the present office holders – including himself – going for a second term.

In November 2002, Anyim indefinitely suspended Senator Arthur Nzeribe of Imo State due to an allegation of a N22 million fraud. Nzeribe was said to be planning an impeachment motion against Anyim. The same month, after Anyim had complained about the Independent Corruption Practices and Other Related Offences Commission (ICPC), the Senate set up a committee to examine the continued relevance of the commission. In May 2003, Anyim warned an Abuja High Court judge, Justice Egbo Egbo, that the parliament had the power to order his arrest over his opposition to the passage of the anti-graft ICPC law by the Senate.