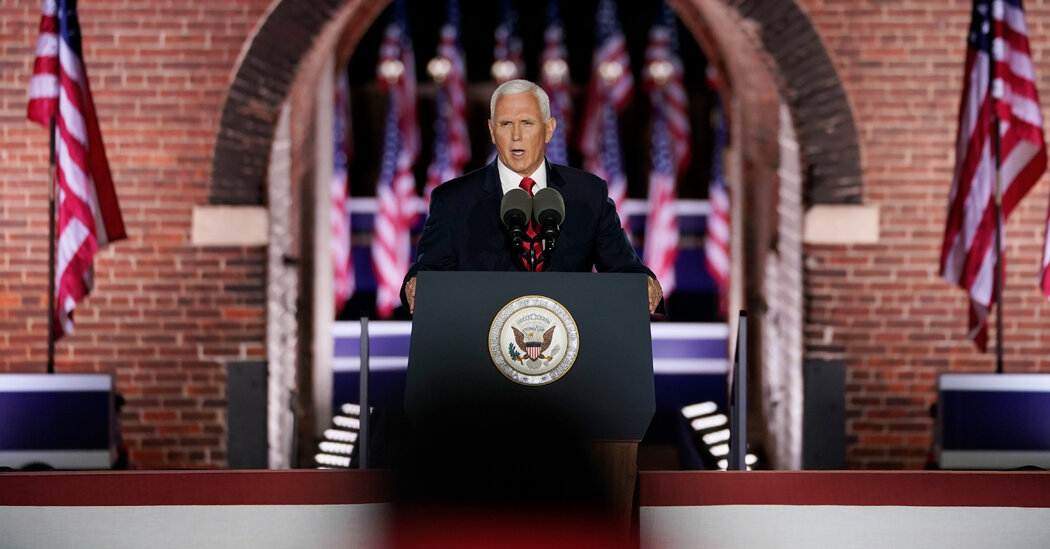 “Four more years! Four more years!” “Joe Biden said that we were living through a ‘season of darkness.’ But as President Trump said, where Joe Biden sees American darkness, we see American greatness. Four years ago, I answered the call to join this ticket, because I knew that Donald Trump had the leadership and the vision to make America great again. And for the last four years, I’ve watched this president endure unrelenting attacks but get up every day and fight to keep the promises that he made to the American people. My fellow Americans, we’re passing through a time of testing, when in the midst of this global pandemic, just as our nation had begun to recover, we’ve seen violence and chaos in the streets of our major cities. President Trump and I will always support the right of Americans to peaceful protest, but rioting and looting is not peaceful protest, tearing down statues is not free speech, and those who do so will be prosecuted to the fullest extent of the law. [applause] So let me be clear: The violence must stop — whether in Minneapolis, Portland or Kenosha. Too many heroes have died defending our freedom to see Americans strike each other down. We will have law and order on the streets of this country for every American of every race and creed and color.” [cheering] “President Trump has stood up for our heroes every day. He stood by our law enforcement, our military and the freedoms we hold dear. He’s made good on his promise to put America first. And I hope you will stand with me as we send him back for four more years, with a clear message to the Democrats: You will never cancel our heroes.” “You may know me as a supporter of President Trump. But tonight I’m here to share with you how he supported me — both as a new mom and as an American with a pre-existing condition. When I was 21 years old, I got a call that changed my life. It was my doctor, informing me that I had tested positive for the BRCA2 genetic mutation, a mutation that put my chances of breast cancer at 84 percent. On May 1, 2018, I followed in my mother’s footsteps, choosing to get a preventative mastectomy. As I came out of anesthesia, one of the first calls I received was from Ivanka Trump. As I recovered, my phone rang again. It was President Trump calling to check on me. I was blown away. Here was the leader of the free world caring about my circumstance.” “I was raised in a household of all women. They were self-reliant and resilient. Their lives were not easy, but they never complained. Money was tight, but we had an abundance of what mattered most: family, faith and freedom. I learned that, in America, limited means does not make for limited dreams. The promise of America belongs to us all.” “I wasn’t born a Trump. I’m from the South. I was raised a Carolina girl. I went to public schools and worked my way through a state university. Mrs. B. from my seventh-grade English class was right. What I learned about our president is different than what you might have heard. I learned that he’s a good man, that he loves his family, that he didn’t need this job. We cannot dare to dream our biggest dreams for ourselves or for our children while consumed by worry about the safety of our families. President Trump is the law-and-order president, from our borders to our backyards.” [music, “Hail to the Chief”] [cheering]

Corrupt politicians Must not celebrate over Magu’s ordeal – HEDA