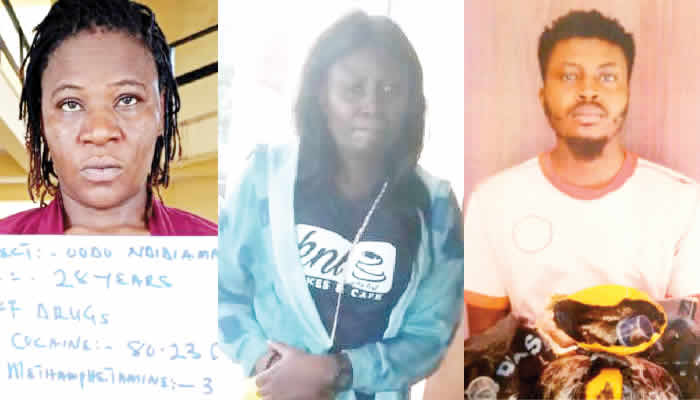 Idio, according to the Niger State Commander of the agency, Haruna Kwetishe, concealed the drugs inside the inner pages of textbooks to sell on the campus.

Kwetishe added that two other traffickers, Yahaya Joshua and Yahaya Audu, were also arrested on the Mokwa-Jebba Road with 32kg of Indian hemp.

The operatives of the agency also raided some eateries in Jos, Plateau State, where freshly baked cakes were made with Indian hemp and 48.726kg of assorted psychotropic substances were recovered.

A statement by the Director, Media and Advocacy, NDLEA, Femi Babafemi, on Monday, said the operatives also raided the KNL Lounge located on the Lamingo Road and its branch in the Mining Quarters area of the Rantya Low Cost Estate and Tuscany Lounge on the Azaki Avenue, all in Jos, where drugged cakes were also recovered.

According to Babafemi, psychotropic substances such as 14kg of Barcadin codeine, 355.5g of Flunitrazapem, 370.1g of Tramadol, 30kg of Exol-5, 2.5kg of Diazepam and 1.5kg of Pentazocine were recovered from the eateries.

The state Commander of the agency, Ibrahim Braji , stated that five persons had been arrested in connection with the seized drugs.

It was gathered that the Enugu State Command of the agency also arrested a 28-year-old lady, Oodo Ndidiamaka, with 80.23g of cocaine and 3.81g of methamphetamine.

The Commander of the agency in the state, Abdul Abdullahi, said the command was committed to unravel other members of drug cartels in the state.

The Chairman/Chief Executive Officer, NDLEA, Brig. Gen. Buba Marwa (retd.), commended the commands of the agency for disrupting the activities of drug cartels in their states.

He, however, charged them to remain relentless in the pursuit of the agency’s mandate to rid the country of illicit drugs.

BBNaijaLockDown:I’m Attracted To You, But Not Physically – Erica Tells Laycon (video)

Gani Adams Reveals Where Bandits Are Mining Gold In S/West