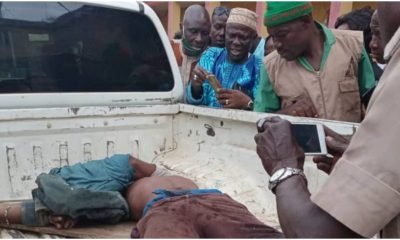 Feyisola Dosumu, a suspected serial killer, terrorising Iperu and Ogere communities, in Ikenne Local Government area of Ogun State has died as a result of the gun injuries he sustained while being arrested on Tuesday.

The Ogun Commissioner of Police, Edward Ajogun, confirmed that the suspect was shot when he tried to attack the police with a broken bottle and a cutlass.

According to Ajogun, the late serial killer was tracked with the help of a drone to his hideout inside a bush in Ogere, where he had created a settlement for himself.

Ajogun said the suspect was so tactical in his approach as he cleared enough space in the bush, dug trenches in order to avoid police arrest.

READ ALSO:   Daring act!Man Escapes Being Crushed By An Angry Cow During Sallah

He disclosed that the police engaged him when he broke a bottle and gave him a “fatal injury” that later led to his death.

This, he added, has put paid to the bloodletting championed by Dosumu in Iperu and Ogere communities.

We gathered Governor Dapo Abiodun could not hide his joy as he appreciated the police, the local hunters and other security agents who participated in the search for the said serial killer, wreaking havoc in his hometown.

Abiodun warned other criminals in Ogun State to steer clear, saying the government will not condone any act of criminality.

Dosumu, it was said, has killed several residents of Ogere and Iperu communities between April and August.

His victims include a pregnant woman, a security guard attached to a poultry farm and a community leader, Elder Oladeji Olatunji, who he hacked to death on Friday.

It was gathered that the young man was a cultist who escaped from a psychiatrist hospital to engage in killing innocent souls.