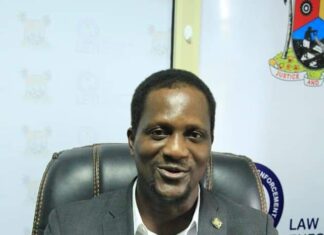 The Director General, Lagos State Law Enforcement Training Institute, LETI, Prince Ifalade Ajasa Oyekan, is tenaciously driving the cosmopolitan vision of the executive governor of Lagos State, Babajide Sanwo-Olu who is determined to reposition the psyche of Lagos security officers including exterminating attitudinal lawlessness in the discharge of their duties.
Prince Oyekan, a son of the late Oba of Lagos, Oba Oyekan, stated this during a chat with delegate executive members of the National Association of Online Security Reporters (NAOSRE) at his Magodo office in Lagos on Wednesday.

He explained that given that security officers are the first contacts with both local and international visitors to Lagos, “Governor Babajide Sanwo-Olu considered it mandatory to re orientate all employed officers through training in line with global best practice, a development that would advertise the Sate as friendly to tourists, citizens and investors,” he said.
To square up with the governor’s vision, Ifalade disclosed that he has developed a curriculum, patterned towards proactive strategy instead of reactive, saying that the training templates are implemented through modern and 21st Century security gadgets.
“So far, we have been able to change many things. We have rebranded as directed by Mr. Governor for better service delivery. We have created a road map. Governor Sanwo-Olu is wonderfully supporting LETI and we are grateful. He gave us expenditure approval in February. That has never happened before. In the past, expenditures were approved after middle of the year. His speedy and early approvals are the reasons we now run training between February and November. In December, LETI’ officers are deployed into all parts of Lagos to monitor the improved performance of our trained officers,” he stated.

Moreso, he disclosed that the agency has trained thousands of officers within three months, adding that “We have identified peculiarities of different agencies and our trainings are designed according to the statutory duties of each agency.”

He pointed out the introduction of body camera on officers on duty. “It is being used in other parts of the world. It monitors officers’ behaviour while on duty. It has helped us to check officers’ lawlessness against citizens. They are now better behaved. Every action of officers is monitored. The camera has infrared. It has two sim cards. It functions for 8 hours. It is one of the achievements of governor Sanwo-Olu”

Not resting on his oars, Oyekan further disclosed that the long strategic arm of his vision is the plan to upgrade the Institute to an Academy, a development that would empower LETI to award different categories of degrees for its graduates for enhanced productivity and excellent security service delivery, maintaining that it forms the spirit behind the re invigorated and re engineered operational modes of the Institute.

“With a population of over 22 million, Lagos has peculiar security challenges and its management has to be subsumed in the short and long term theoretical and physical training solutions.”

LETI was formed in 2013 by an executive order by the Babatunde Raji Fashola’s administration to, among other things, serve as a training Institute for security personnel for professional response to a vacuum occasioned by the growing human and commercial activities in the build up to making Lagos a mega city.
Lagos State current security formations include Lagos State Traffic Management Agency (LASTMA), Kick Against Indiscipline (KAI), Lagos State Neighbourhood Agency (LSNA), Vehicle Inspection Service (VIS), Central Business District Enforcement Corpse (CBD EC).