Home News How US, UK, Russia, Others Can Learn Politics From APC – Yahaya... 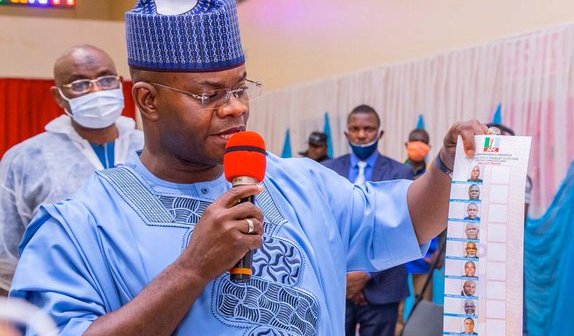 Governor Yahaya Bello of Kogi State has revealed how US, UK, Russia others democracies can learn politics prom APC.

Bello boasted that the All Progressives Congress (APC) will teach developed nations how to play politics right,CityNews Nigeria reports.

The governor stated this on Tuesday at the national secretariat of the APC in Abuja where he was inaugurated as Chairman of Women and Youth Sensitization and Mobilization Committee of the party.

Yahaya Bello said by the time the ruling APC is done with its membership registration and revalidation exercise, it would call on developed nations to come and learn from Nigeria.

According to the governor, APC will invite developed countries including one which has just concluded a rancorous election, a reference to the electoral crisis that rocked the US.

He said; “We have accepted this responsibility. It is a sacrifice, it is out of patriotism, it is a national assignment. We are going to deliver resoundingly. The APC will continue to win every election in this country.

“By the time we are done and all the registration of new members and revalidation of existing members are done in the country, APC will not just be the largest in Africa but we are going to call on even the developed nations to come and learn from APC in Nigeria.

“We shall even teach some of our brothers who have just concluded elections that were rancorous. I will not mention names but we are going to be an institution of politics in Nigeria”.