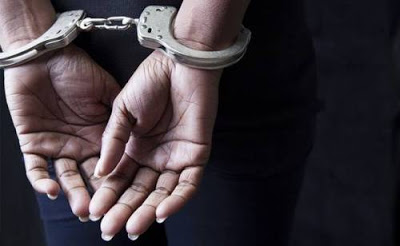 Two suspected kidnappers, Sunday Chukwu and Chidokwe Efide, have been arrested by the police for allegedly kidnapping a businesswoman, Maris Ibe, in Delta State.

The suspects were rounded up after collecting N1m ransom to free the victim kidnapped on January 14, 2021, around Ibori Golf Club, Asaba, the state capital.

Citynewsng.com learnt that the victim petitioned the Inspector-General of Police, Adamu Mohammed, after her release and operatives of the IG’s Intelligence Response Team were deployed in Delta State to hunt down the kidnappers.

The detectives reportedly recovered three locally-made guns, an axe, 10 unexpended cartridges and a sum of N320,000 from the suspects.

In his statement, 28-year-old Sunday Chukwuka, from Anambra State, said he used to be a farmer and sand miner before he was introduced to kidnapping and armed robbery by two friends identified simply as Ali and Muritala.

He stated, “They showed me their guns and took me to where they kept them. During the lockdown last year, they relocated to their hometown in Kogi State and left the guns behind. When things became difficult for me as the lockdown continued, I picked up the guns and called one of my friends, Efibe.

“We talked about forming a kidnapping gang. We then trailed a woman (Ibe) driving a nice car to her house and abducted her at the gate of her house. We took her into the bush. The woman called her husband and we demanded N500,000.

“She told her husband to increase the ransom to N1m and warned him not to involve the police. We became friendly with her. We neither beat her nor blindfold her. I collected the money from her salesgirl who brought it. I got N500,000 as my share of ransom and it is still in my back account. I wanted to rent an apartment with it. I was arrested three days after the operation. I have given my life to Christ and I want to turn a new leaf.”

Efide, 27, also from Anambra State, who claimed to be suffering from a kidney-related ailment, said he used part of his share of the ransom to buy some home appliances and saved the rest for his treatment.

He expressed regret over his involvement in the crime, blaming Chukwu for luring him into it.

He said, “I used to make between N4, 000 and N5, 000 at Asaba waterfront for loading sand into tippers. The owners of the sand brought in some machines which started doing our jobs and I had to look for a way to survive.  The devil used my friend, Chukwuka, to lure me into kidnapping. I accepted to join him in the kidnapping because I needed money to treat myself.”

EDO Decides:I Sold A Bad Product To Edo People In 2016 – Oshiomhole Kneels Down...

‘Many trapped’ as tanker explodes on Lagos-Ibadan expressway

Breaking: Nnamdi Kanu To Shut Down Abuja, Lagos, South/East May 30