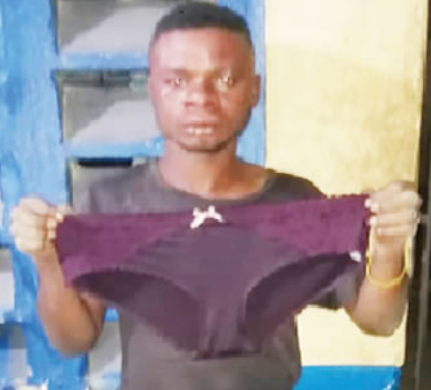 A vulcanizer, Dele Ope is now in police net for allegedly stealing underwear belonging to his female client.

Ope said he stole the briefs for money-making rituals and was planning to take it to a herbalist, who, according to him, will help him prepare the money ritual.

Oyeyemi said the 22-year-old vulcaniser was arrested following a report by a woman at Warewa division that she noticed her pant went missing after the accused left her house.

The unnamed woman, it was learned, said she had invited the man to his compound to help in fixing her deflated tyre.

But, after the suspect had left, she observed that her pants spread on a rope was nowhere to be found.

It was gathered that a search for the vulcanizer began immediately, being the only one who came into the compound at the time.

The DPO of Warewa division, SP Folake Afeniforo, reportedly detailed her detectives to the area where the suspect was traced and promptly arrested.

Police informed that upon his arrest, the Ope’s house was searched and the woman’s pants were recovered therein.

“On interrogation, the suspect confessed to stealing the underwear with the intention of taking it to a herbalist for a money-making ritual,” Oyeyemi said.

Ogun Commissioner of Police, CP Kenneth Ebrimson, has directed that the suspect be charged to court immediately investigation is concluded.

Why South/West Will Suffer If Nigeria Breaks – Sir Olu Okeowo

Panic As 52 Passengers On A Flight From India To Hong Kong Test Positive For...