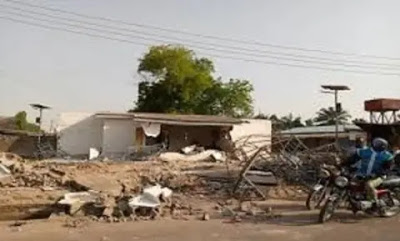 Kwara State High Court in Ilorin on Thursday penalised the Saraki family for their persistent absence to prosecute the case over ownership of the controversial “Ile-Arugbo” between the family and Kwara state government.

Following repeated failures of counsel to the claimant Asa Investment Limited, Akin Onigbinde, to appear before the court to fully prosecute its case, Justice Abiodun Adewara, in his ruling awarded a penalty of N200,000 each in favour of all the four defendants (Kwara State Governor, Attorney General, House of Assembly, and Bureau of Lands) and another N50,000 to the police on account of the failure of the claimant to allow the case to proceed to hear on various occasions.

Justice Adebara took the decision after the counsel to the claimant Akin Onigbinde again failed to attend the court session on Thursday.

Onigbinde, instead sent a letter, accompanied with a medical report, saying he was advised to undergo bed rest between 3rd and 10th of August, 2020.

After many adjournments at the instance of the claimant, Onigbinde had again on July 8th agreed to an adjournment for July 22nd but he later said he could not make the sitting.

Salman Jawondo, Attorney General and Commissioner for Justice in Kwara State who appeared for the government said the claimant was “deliberately wasting the time of the court” and urged Justice Adebara to dismiss the case for lack of diligent prosecution and to award N250,000 penalty each against the claimant and in favour of the defendants.

Jawondo, who insisted that Asa Limited was just buying time with the numerous adjournments, wondered why other counsel to the claimant cannot continue with the case in the absence of Onigbinde.

The Police, which is the fifth defendant in the case, aligned with the government’s position that the case should be struck out.

Justice Abiodun Adebara, however, adjourned the matter to 23rd and 24th of September to allow the claimant’s counsel to continue the case, warning that he would not grant any other adjournment after this.

The “Ile-Arugbo” owned by the late Kwara State political leader, Dr Abubakar Olusola Saraki, became controversial and object of litigation December 2019 when the Kwara State government demolished the existing bungalow building on it with a view to construct a phase of government secretariat on it.

While the Sarakis opposed the action, the Kwara State Government claimed that the Saraki family did not pay and buy the controversial land from Kwara State government.

The Asa Investment Limited, which is purportedly owned by the late Olusola Saraki, had taken the Kwara State Government to court after the latter reclaimed the land which it said was unlawfully taken over by the firm without any right of occupancy or payment to the owner, the state government.