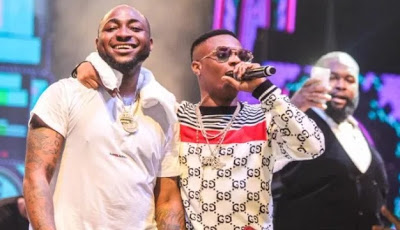 Davido is definitely known for good music but he is also good in creating a buzz on the internet.

And recently, he did it again by stating that he is better than Wizkid.

Since Davido dropped his first single of the year, “FEM,” in September, social media platforms have been awash with speculations of whether he was throwing shade at Burna Boy or Wizkid.

However, with “FEM” now making great numbers across all streaming platforms, drama started when a Wizkid fan identified as Seyi accused Davido of buying views on Youtube as the visuals hit over 3 million views in just 24 hours.

“When the hype is down, we’ll talk about how Davido pulled the biggest heist on YouTube with Fem,” Seyi wrote on Twitter.

Davido responded telling the fan to accept that he is bigger than his favorite artiste.

The fan fired back proudly stating that he is a Wizkid fan. “My fave is Wizkid Ayo Balogun! Stop capping.”

Davido responded again saying he meant it when he said that he is bigger than his favorite artsite. “Calm down why u shouting … I SAID WHAT I SAID“