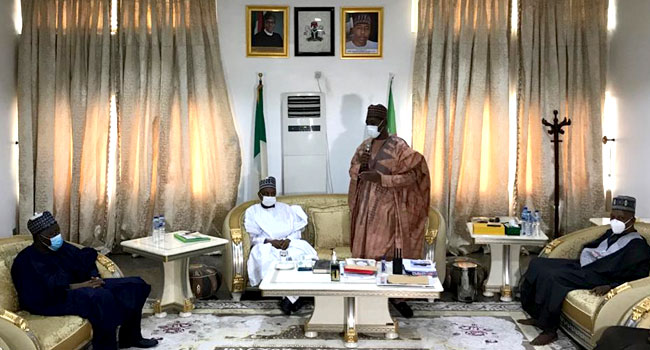 Borno State Governor, Babagana Zulum, has insisted that there is sabotage in the system that will not allow insurgency to end in the North East.

He said this on Sunday when he met with the Governors of Kebbi and Jigawa States, Atiku Bagudu and Badaru Abubakar, who paid him a solidarity visit over the recent attack in Baga – a town in Borno.

Governor Zulum believes some elements are trying to frustrate the effort of the government in ending the insurgency and President Muhammadu Buhari needs to know the truth.

He said, “Let me also re-echo my previous position with respect to the level of insurgency in Borno State, I earlier said that the gravity of the insurgency cannot be compared with what has happened between 2011 to 2015, and 2015 to date. Yes, it’s true. The President has done well.

“But there’s sabotage in the system that will not allow insurgency to end; the President has to know this very important point.”

“When he came to Maiduguri two months ago, I said so because between 2011 to 2015, at a time, almost about 22 LGAs were under the insurgents.

“Out of the four main roads that lead to Maiduguri. only one was functional,” the governor added.

‘Why Is Insurgency Not Ending?’

He stressed the need for the President to examine the security situation in the region critically, to ensure the effort of his administration was not in vain.

Recounting his experience during his recent trip to Baga town, Governor Zulum accused the military of taking over the farmlands of residents.

READ ALSO:   Edo 2020: Obaseki Drags Tinubu, Reveals What Lagosians Should Do To Him After September 19

He insisted that there was no justification for what he described as preventing residents displaced by insurgency from returning to their ancestral homes.

“There’s one very important question that we need to ask, why is the insurgency not ending? There’s sabotage in the system and there’s a need for the President to examine the current situation with a view to resolving it.

“We have a huge population and people do not have access to their agricultural lands, and poverty is one of the causes of insurgency; why are you not allowing people to go back to their ancestral lands so that they will go and earn their living?” the governor questioned.

He added, “A situation where our Nigerian military are farming the lands, denying access to the common man to farm; what justification do they have for not allowing our people to go back to their ancestral homes?

The meeting, which was also attended by the state Deputy Governor, Umar Kadafur, held at the Government House in Maiduguri, the Borno State capital.

Also present was the immediate past Governor of Borno, Senator Kashim Shettima, as well as Senator Ali Ndume and members of the State Executive Council.