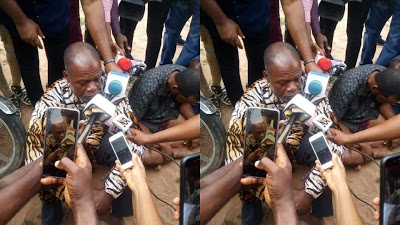 Eze Andrew Okuegbunuwa, a traditional ruler in Awara, Ohaji/Egbema Local Government Area of Imo, was on Monday paraded by the police for alleged involvement in kidnapping.

The 59 year-old ruler of Obor Community was paraded along with 30 other suspects who allegedly committed various crimes, ranging from robbery, kidnaping and rape, among others.
The Commissioner of Police in Imo, Mr Issac Akinmoyede, said a gang had kidnapped one Louis Obodo, at Mgbala Agwa and Insp. Oscar Mbaeri, in Agwa in Oguta Local Government recently.
He said that the gang kidnapped Chigozirim Nnaji, Desmond Okonkwo and Anyanwu Amarachi on July 19 after which the police gave them a hot chase.

Akinmoyede said that the gang had abandoned their unregistered Lexus 330 Jeep during an exchange of gun fire with operatives of the Special Anti-Robbery Squad and Anti-kidnapping units of the command.
The traditional ruler confirmed the gang used his Lexus 330 with registration number URM 404 EL during the kidnapping. 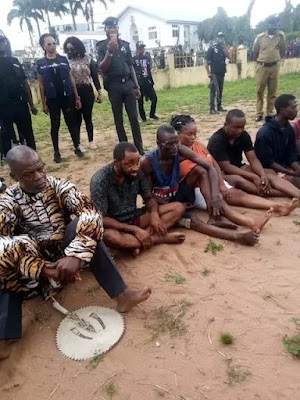 He also said the gang paid him N3million to replace the vehicle, after the police impounded it.
“My Nephew took my vehicle to do kidnapping, I am not one of them. Though they have used my vehicle about four times and they gave me money,” he said.
Akinyomede gave the details of the operation of the gang and how the gang members were picked one, after the other:
On 19/7/2020, a gang of kidnappers came into Owerri Metropolis, at different locations, kidnapped one Louis N. Obodo ‘m’ aged 45yrs of Mgbala Agwa in Oguta LGA, Inspr. Oscar Mbaeri ‘m’ aged 40yrs of Agwa in Oguta LGA, Chigozirim Festus Nnaji ‘m’ aged 39yrs of Egwelu Atta in Njaba LGA, Desmond Okonkwo ‘m’ aged 38yrs of Nnempi in Oru West LGA and Anyanwu Amarachi ‘f’ 30yrs old of No. 76 Lobo Street, Owerri, all of Imo State.
While escaping with their victims, operatives of the Command’s Anti-Kidnapping Unit (AKU) and Special Anti-Robbery Squad (SARS), gave them a hot chase, forcing them to abandon three (3) of their victims and their operational vehicle a Lexus RX330 SUV with Reg. No. (EDO) URM-40 EL. Through the help of their motorcycle pilots and backups who always lead the way before and after operations, the hoodlums managed to escape with two of the victims.
However, a few moments later SARS operatives arrived the scene, saw the abandoned vehicle and recovered it to the station.
Based on the above, Anti-Kidnapping Unit (AKU) and SARS conducted joint investigation with a view to rescue the victims and possibly arrest the hoodlums.
On 28/7/2020, at about 0400hrs at Umuokuzu Awara in Ohaji/Egbema LGA of Imo State, operatives of the Special Anti-Robbery Squad (SARS) through painstaking and diligent investigation arrested one Eze Andrew Okuegbunuwa ‘m’ aged 59yrs old of Obor Community in Awara, Oguta LGA, Imo State, in connection with the kidnap and other armed robbery incidents. Investigation further revealed that the arrested suspect provided the operational vehicle, Lexus RX330 SUV with Reg. No. URM 404 EL for the kidnappers.
Having lost the vehicle in the operation, Andrew Okuegbunuwa was given the sum of N3,000,000.00 (Three Million Naira) to replace his vehicle by the kidnappers. It was further discovered that the vehicle was not registered as there is no record of the said vehicle in the Federal Road Safety Commission (FRSC) database.
His arrest also led to the arrest one Benard Uzoma ‘m’ a native Doctor at Umunoha, in Mbaitoli LGA, whose job is to provide the gang with protection from death and arrest. He was paid the sum of two hundred thousand (N200,000) as his own share from the loot.
On 29/7/2020, operatives of the Anti-Kidnapping Unit in continuation of the investigation arrested one CALEB AGU ‘m’ a 42years old pastor from Umuoni Agwa in Oguta LGA, Imo State. He confessed being the head and spiritual leader of the gang.
Also one EBENEZER OBIOHA ‘m’ 38yrs old, was arrested with bullet wounds in his hometown OGAMMA AWARA IN OHAJI EGBEMA LGA ,where the operatives, came under heavy attack. In the process of his arrest, four (4) AK 47 rifles, one Light Assault Rifle (LAR) belonging to NDLEA, one Sub- Machine Gun (SMG) belonging to NDLEA as well were recovered. The arrested suspects confessed to being the gang that shot at the three NDLEA officers and carted away their rifles (LAR and SMG) on 15/05/2020 at 1945hrs, when they were ambushed at Ohi Junction while coming back from an assignment.
A total sum of Four Million Two Hundred Thousand Naira (N4,200,000) was recovered from the suspects out of the combined ransom of Seven Million, Five Hundred Thousand Naira (N7,500,000) paid for the release of the two victims.
The group which operates once in a month according to our intelligence had to step up the tempo to twice a month in compliance with the directive from CALEB (their pastor), who told them that he needed money to conclude his ongoing projects.
It is noteworthy therefore, that both Caleb and Ebenezer commenced the construction of their mansions at Awara and Agwa respectively in January 2020, and both buildings are at completion stages.
Investigation was extended to the operational base of these criminals at Omoku creek in Rivers state. Also arrested are:-
1. FABIAN OBIOHA ‘M’ AGED 60YRS OF OGAMMA AWARA IN OHAJI EGBEMA LGA
2. OGECHI OBIOHA ‘F’ AGED 30YRS OF OGAMMA AWARA IN OHAJI EGBEMA LGA
3. KENNEDY OKWUONU ‘M’ AGED 40YRS OF ONITSHA IN OBINGWA LGA, ABIA STATE.
They have confessed to their respective roles in the gang and the operation as follows:-
CALEB AGU (A Pastor) Head and spiritual Leader and Director of the gang.
IKECHUKWU NJOKU is the Protocol officer and boy to Caleb who uses bike to transport victims through track roads to the point of pick up to the creek.
EBENEZER OBIOHA is the operational commander and an executor to the gang. He confessed to being the one that shot the NDLEA officers.
FABIAN OBIOHA is the father of Ebenezer and the gang’s armourer.
KENNEDY OKWUONU is Ebenezer’s brother-in-law who provides the group with hard drugs as well as other logistics at the creek.
EZE ANDREW OKEGBUNUWA: – Provide the gang with vehicle for their operations.
OGECHI OBIOHA: – Distribute ransom to the members of the gang at their various locations as soon as payment is made by victims.
BENARD UZOMA: – A native doctor, provided the gang with protection from operational hazards and arrests.
Suspects will be charged to court as soon as investigation is completed.

See Why Surety Was Remanded In Benin Prison