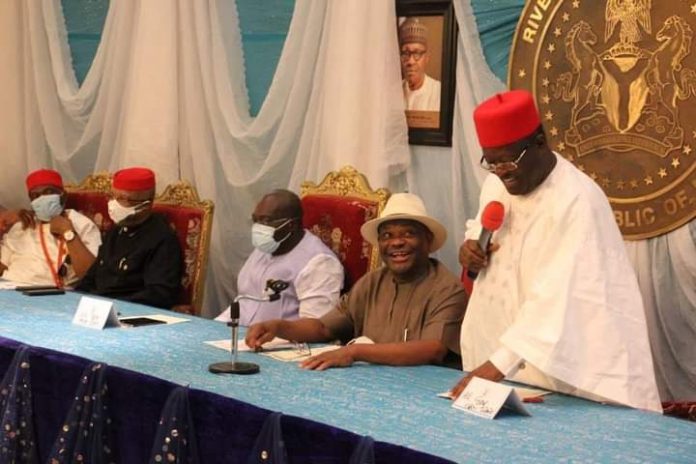 Chairman of the South-East Governors Forum and Governor of Ebonyi State, Dave Umahi, has warned Igbo to be weary of the Indigenous Peoples of Biafra because the outlawed group is working to instigate another civil war.

A statement by the Special Assistant of Media to the Rivers State Governor, Kelvin Ebiri, said Umahi spoke during a meeting of the South-East governors with the leadership of Ohanaeze Ndi-Igbo and the Igbo community in the state at Government House, Port Harcourt, Rivers State on Sunday.

Umahi, after listening to Governor Nyesom Wike’s narration of the atrocious activities of IPOB in Oyigbo that culminated in the imposition of curfew in the local government area, warned Igbo to be wary of IPOB as the group was “bent on instigating another civil war that will result in the murder of Igbo people.”

The governor said, “I find it nauseating that IPOB could go to Benue and Rivers states to foist its flag and claim the territories belong to the Igbo people. Igbo leadership are opposed to this stance by IPOB.”

Umahi urged Igbo living in the state to respect the government and people of Rivers State adding that Ndi-Igbos cannot support any form of criminality.

Also speaking, the President-General of Ohanaeze Ndigbo, Chief John Nwodo, said the meeting has reinforced the existing relationship between Igbos and the people of Niger Delta and described Wike as a champion of restructuring of Nigeria and a man who loved justice.

UNwodo, said he was elated to hear from Igbo leaders that under the leadership of Governor Wike, Igbo businesses have continued to thrive.

Earlier, Wike said the state would continue to be home to people of the Igbo ethnic nationality.

“Tell your people, Rivers people will continue to live together with Igbos. Don’t allow your sons to tell you lies. Igbos are innovative and hardworking. There can’t be Nigeria without Igbos. Nobody should take them for granted. But that doesn’t mean you must allow criminals to spoil your name.

“If I hate Igbo, I won’t appoint your son into my state cabinet two times. But you have to obey rules. Don’t allow criminals to dictate to you,” Wike stated.