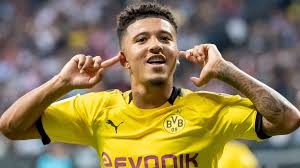 Borussia Dortmund have given Manchester United a one-week ultimatum, to wrap up a deal for Jadon Sancho.

Both clubs are still negotiating for the England winger, the UK Mirror reports.

However, the Bundesliga outfit have set an August 10 deadline, to decide Sancho’s future, before they head to their Swiss pre-season training camp.

United executive vice-chairman, Ed Woodward, had initially been keen to agree a fee closer to £80million, but Dortmund are insisting their £105million valuation is met.

Woodward will now look to structure instalmental payments with Dortmund.

Sancho remains United’s No.1 target this and manager Ole Gunnar Solskjaer has tasked club bosses with getting a deal done as soon as possible.

Solskjaer wants Sancho in place with plenty of time before the start of the new season.

Kim Kardashian sells 20% stake of her beauty line to Coty , increasing the value...

Buhari has not cancelled memos and appointments signed off by late Chief of Staff Abba...