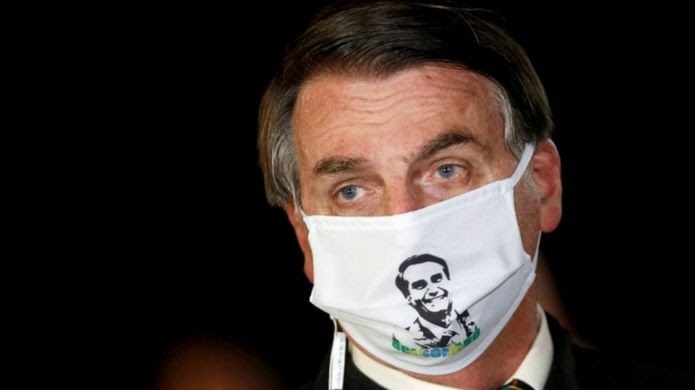 He took the test, his fourth, on Monday after developing symptoms, including a high temperature.

Mr Bolsonaro has repeatedly played down the risks posed by the virus, calling it “a little flu” and saying that he would not be seriously affected by it.

He has also urged regional governors to ease lockdowns, which he says hurt the economy, and on Monday he watered down regulations on wearing face masks.

Mr Bolsonaro made the announcement in a TV interview on Tuesday. He said the fever he had been experiencing had gone down and that he felt “very well”.

Back in April, he said that even if he were to be infected with the virus, he would “not have to worry as I wouldn’t feel anything, at most it would be like a little flu or a little cold”.

When he made the remark, the number of Covid-19-related deaths was still under 3,000 and the number of infections was around 40,000.

But the numbers have skyrocketed since then. As of Monday, the number of deaths was over 65,000 and infections were over 1.6m, second only to the United States.

Despite the rising numbers, President Bolsonaro has argued that regional lockdowns are having a more damaging effect than the virus itself, and accused the media of spreading panic and paranoia.

“From what I have seen until now, there are other kinds of flu which have killed more people than that [coronavirus] one” (11 March)

“Today we have information, that because we have a more tropical climate [in Brazil] we’ve almost reached the end [of the pandemic], or it’s already over (…) the virus doesn’t spread as fast in warm climates like ours” (18 March)

“After being stabbed, I’m not going to be brought down by a little flu” (20 March)

Why APC NEC May Sack Oshiomhole, NWC Members On Thursday