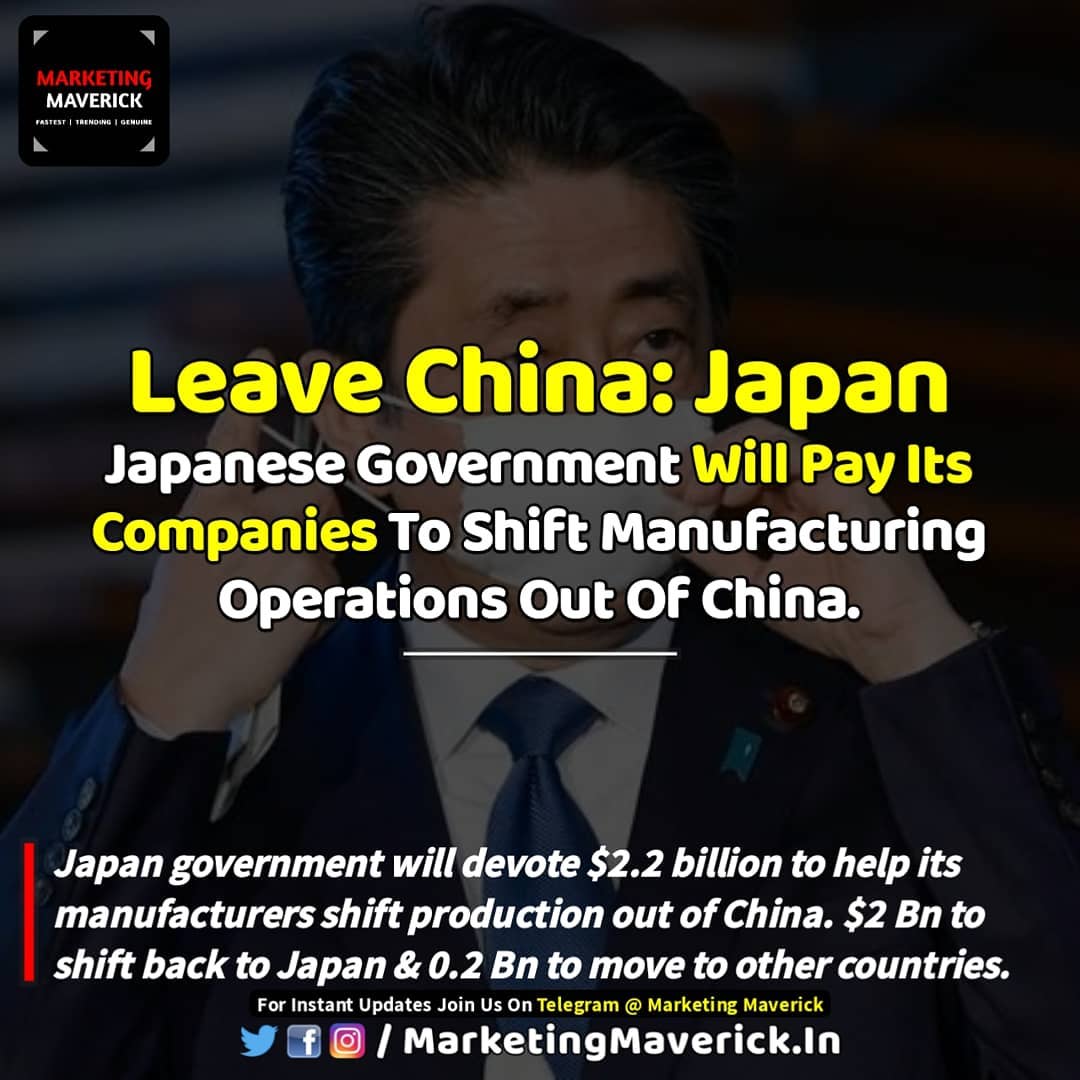 Japan has earmarked of its record economic stimulus package to help its manufacturers shift production out of China as the coronavirus disrupts supply chains between the major trading partners.
The extra budget, compiled to try to offset the devastating effects of the pandemic, includes 220 billion yen ( ) for companies shifting production back to Japan and 23.5 billion yen for those seeking to move production to other countries, according to details of the plan posted online.

The move coincides with what should have been a celebration of friendlier ties between the two countries. Chinese President Xi Jinping was supposed to be on a state visit to Japan early this month. But what would have been the first visit of its sort in a decade was
postponed a month ago amid the spread of the virus and no new date has been set.
China is Japan’s biggest trading partner under normal circumstances, but imports from China slumped by almost half in February as the disease shuttered factories, in turn starving Japanese manufacturers of necessary components.

That has renewed talk of Japanese firms reducing their reliance on China as a manufacturing base. The government’s panel on future investment last month discussed the need for manufacturing of high-added value products to be shifted back to Japan, and for production of other goods to be diversified across Southeast Asia.
“There will be something of a shift,” said Shinichi Seki, an economist at the Japan Research Institute, adding that some Japanese companies manufacturing goods in China for export were already considering moving out. “Having this in the budget will definitely provide an impetus.” Companies, such as car makers, that are manufacturing for the Chinese domestic market, will likely stay put, he said.

Testing Times
Japan exports a far larger share of parts and partially finished goods to China than other major industrial nations, according to data compiled for the panel. A February survey by Tokyo Shoko Research Ltd. found 37% of the more than 2,600 companies that responded were diversifying procurement to places other than China amid the coronavirus crisis.
Japan Unveils Record Stimulus Amid Virus Emergency
It remains to be seen how the policy will affect Prime Minister Shinzo Abe’s years-long effort to restore relations with China.

“We are doing our best to resume economic development,” Foreign Ministry spokesman Zhao Lijian told a briefing Wednesday in Beijing, when asked about the move. “In this process, we hope other countries will act like China and take proper measures to ensure the world economy will be impacted as little as possible and to ensure that supply chains are impacted as little as possible.”
The initial stages of the Covid-19 outbreak in China appeared to warm the often chilly ties between the two countries. Japan provided aid in the form of masks and protective gear — and in one case a shipment was accompanied by a fragment of ancient Chinese poetry. In return, it received praise from Beijing.
In another step welcomed in Japan, China declared Avigan, an anti-viral produced by Japan’s Fujifilm Holdings Corp. to be an effective treatment for the coronavirus, even though it has yet to be approved for that use by the Japanese.

Yet many in Japan are inclined to blame China for mishandling the early stages of the outbreak and Abe for not blocking visitors from China sooner.
Meanwhile, other issues that have deeply divided the neighbors — including a territorial dispute over East China Sea islands that brought them close to a military clash in 2012-13 — are no nearer resolution.
Chinese government ships have continued their patrols around the Japanese-administered islands throughout the crisis, with Japan saying four Chinese ships on Wednesday entered what it sees as its territorial waters.
— With assistance by Lucille Liu
(Updates with comment from economist in sixth paragraph)

SUNDAY IGBOHO AND FALL OF THE YORUBA ELITE