Home General Interest Kim Jong Un’s sister ‘could be even worse for North Korea than... 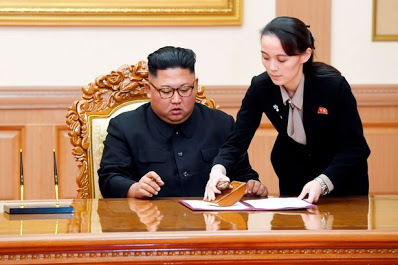 Kim Yo Jong could be North Korea’s most tyrannical dictator yet if she succeeds her brother Kim Jong-Un and may prove ‘a credible nuclear threat to the US’, it’s claimed.

That’s the view of one diplomacy expert, amid speculation that power will pass to Yo-Jung following unconfirmed reports Jong-Un is in a coma.

Sung-Yoon Lee, a professor at Tufts University’s Fletcher School of Law and Diplomacy, believes the reports about the secretive state’s leader have been exaggerated – but says it is clear that Yo-Jong is being groomed to take power.

And he predicts Jong-Un’s younger sister will prove to be “a cruel dictator”.

“The way for her to build up her credibility and net worth, that is, the way for her to get respect, is not to play nice but be a cruel dictator to her people and a credible nuclear threat to the US,” he told the New York Post.

“She may prove herself fiercer and more tyrannical than her brother, father, or grandfather.”

He said if Yo-Jong does take power, she will need to be ruthless, particularly in the early years of her reign.

Col Maxwell helped devise the Pentagon’s 1999 contingency plan with South Korea for the collapse of the North’s regime.

“I haven’t seen any evidence, any indication of how she might rule, but my speculation — given the reputation and history of the family — is that she would rule with an iron fist,” Col Maxwell said.

Jong-Un was expected to be more open with the outside world when he succeeded his father Kim Jong II in 2011.

While that has not proved the case, his sister is expected to take a more abrasive stance.

If she takes charge, her reign would likely be heralded by missile launches as a show of strength, according to Victor Cha, who was a director for Asian affairs at the National Security Council during the administration of former President George W. Bush.

He also predicted she would instigate a purge of government figures in order to install people loyal to herself, and would be “a hard-liner” with South Korea and the US.

Reports that Jong-Un was in a coma circulated earlier this week, while rumours also surfaced that the North Korean leader may have died, having been seen in public only a handful of times this year.

READ ALSO:   Coronavirus : 'I buried my cousin on Facebook Live'

Chang Song-min, a former aide to South Korea’s late president Kim Dae-jung, insisted Jing-Un was still alive, telling reporters: “I assess him to be in a coma, but his life has not ended.

“A complete succession structure has not been formed, so Kim Yo-jong is being brought to the fore as the vacuum cannot be maintained for a prolonged period.”

BREAKING: ‘Smart Adeyemi Is A Mad Man’…’Drunk’ Ikpeazu Fires Back

Primate Ayodele says what Coronavirus will become any time soon