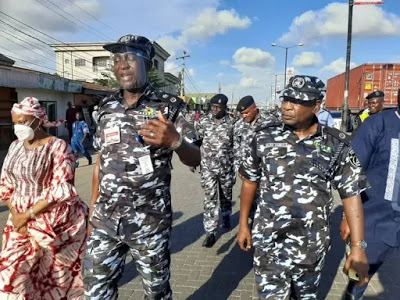 Lagos State Commissioner of Police, Hakeem Odumosu has arrested a Superintendent of Police, Tunji Ajakaiye for assaulting a grandma, Mrs Durojaiye Olaleye, during #EndSARS protest in Surulere area of Lagos, Southwest Nigeria.
Olaleye was assaulted severally on Monday, 12 October, 2020, as captured in a viral video on the social media.

Odumosu, who visited the assaulted woman in Okota on Sunday, was compelled by aggressive #EndSARS protesters in Okota to trek in companies of his senior officers for more than 10 kilometres in order to pay a visit to the assaulted grandma, Mrs Olaleye.

Odumosu, who had earlier been denied access at the Muritala Mohammed Airport tollgate in Ikeja by protesters, ran into a similar barricade at NNPC junction, Okota, where the hyper-aggressive protesters insisted that he and his team alight from their official cars and trek that long distance despite series of explanation and appeal on the command’s mission in the area.

He, like every other officer in Lagos State, who has been professional in tolerating and managing several harassment, intimidation and provocation from the protesters, obliged and trekked for peace to reign.

He said the visit to the assaulted grandma was to sympathize and apologise to her and her family members, assuring them that the arrested police officer, SP Ajakaiye, second-in-command at the disbanded Anti Kidnapping Unit, Surulere, who assaulted the grandma has been queried and would face the Force Disciplinary Committee (FDC) for appropriate punishment.

The police chief also condemned the unprofessional conduct of the senior officer which is unbecoming of his status and contrary to the IGP’s modern policing principles.

While assuring Lagosians of his commitment to sanitise the command, Odumosu encouraged members of the public to report all unprofessional conducts of police officers and men to the command for appropriate disciplinary actions.