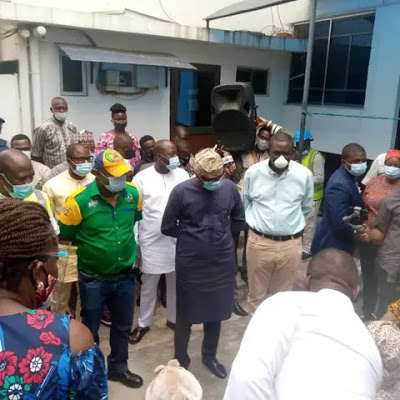 Lagos State Governor, Mr. Babajide Sanwo-Olu has ordered immediate conduct of integrity test on the two buildings at No 16B and 14, Salvation Road, Opebi, Ikeja, affected by the Friday crash of a light helicopter belonging to Quorum Aviation Limited.

The three crew, including the pilot, died in the unfortunate incident.

Recall that the ill-fated helicopter with registration Number 5N-BQW flying from Port-Harcourt to Lagos on Friday, August 28, 2020, at about 12 noon, crash-landed in the premises of the above mentioned two buildings at Opebi, Ikeja en-route Murtala Muhammed Airport, Lagos.

Sanwo-Olu, who arrived the area at about 2pm during an on-the-spot assessment of the area on Saturday, subsequently, directed immediate integrity test on the affected buildings.

Addressing newsmen after the assessment, Sanwo-Olu said, “I was at the site of the helicopter crash at Opebi for an on-the-spot assessment.

“We sincerely sympathize with the families of the victims. I met with the residents of the buildings and we all thanked God for His abiding grace.

“I have ordered immediate conduct of integrity test conduct on both of the affected buildings to know the level of impact.

“We are taking on the responsibility of renovations and will provide all the necessary support to cushion the effects of this tragic incident.”

Sanwo-Olu, in a condolence message earlier, signed on his behalf by his Chief Press Secretary, Mr. Gboyega Akosile, promised that his Government would work with all the relevant Federal Government agencies to unravel the remote and immediate cause of the accident so as to prevent a reoccurrence in the future.

He prayed that God would grant the deceased eternal rest and grant the families they left behind the fortitude to bear the loss.