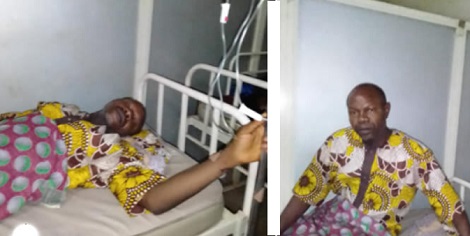 The Punch gathered that the incident happened around 08.30 pm on Thursday.

Fashogbon said he had gone to inspect his family’s land located at Bamigbose Fashogbon Village, Ota, Ogun State, which he claimed a High Court had awarded in the family’s favour when he was arrested by police.

A copy of the judgement and a petition addressed to the Inspector General of Police and the Commissioner of Police in Ogun State were made available to Punch correspondent.

Part of the petition read, “Some police officers from Onipanu Division, Obasanjo Ota came to the land around 03 pm and arrested me that they had a signal from the state command Eleweran to do so and I was kept in their custody. Efforts to get bail proved abortive and I had health challenges.

“About 8.30 pm when my wife and counsel approached the officer at the counter, when I was not given bail, to bring dinner to my cell, they found that I was not making any movement. It was my wife that alerted the DPO who then asked that I should be carried out. I was carried out lifeless as I did not know how I got to the hospital (the video is available). It took only the grace of God to revive me.

“Since the matter is already in court and the current judgement is in our favour, I told the police that they had nothing to do with the matter. There is no violence. We will not give room for backdoor justice. Police should ask the petitioner to meet us in court.”

He lamented that while receiving treatment in the hospital, some police officers also attempted to arrest him again without regard for his life.

He added, “I was still asked to come over to the state Command, Eleweran on February 24, where they could arrest and detain me and do other certain things that happened in Police custody and force me to take an undertaking that I and my generation will vacate our homeland in one week.

“Police will come around and evacuate all of us while the matter is already in court and sub judice? Is this how the law is practised? Is their plan to kill me?”

He said, “The man is having a case with the state CID. While he was arrested, they were waiting for officers from the state CID to come and pick him, he collapsed. He was taken to the hospital. On getting to the hospital, the doctor confirmed that he has low blood sugar. He has been treated and responded positively to treatment and he is okay.”

READ ALSO:   WhatsApp's Down All Over The World

On the allegation of misconduct and police interference in a matter already in court, Oyeyemi said, “That is a blatant lie. He did not have any issue with the police. There is a complainant against him. And if a case is reported, it is the duty of the police to listen to both sides and know what is happening. The fact that a case is in court does not mean that you cannot commit another offence as regards it.

“If a case is in court and you are reported, the police have a reason to invite and arrest you. I don’t know what he meant by misconduct. The police did not wake up one day and decide to get him arrested.”

What Nigerian Army Said About Defeating Insurgency In Nigeria

BREAKING: ‘We Are One Nigeria’,Ohanaeze Bombs IPOB,Nnamdi Kanu Over Biafra Agitations