Home General Interest Man pays £6,000 to have his EARS removed so his head looks... 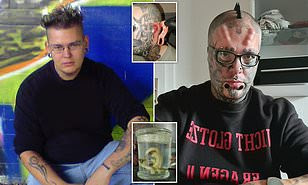 An extreme tattoo lover has spent over £6,000 to have his ears removed so that his head looks like a skull.

Sandro, known as ‘Mr Skull Face’ on social media, insisted his transformed appearance made him feel more confident even though others called him ‘disturbed’ and ‘sick’.

The 39-year-old from Finsterwalde, Germany now keeps the pair of lobes in a jar and is planning to have his eyeballs tattooed and the tip of his nose removed.

Sandro said he first became interested in the world of body modification in 2007 when he saw someone with spikes embedded in their head on TV.

Over the past 13 years, Sandro has had 17 body modifications, including tongue-splitting surgery and a contactless payment chip embedded in his wrist.

He also underwent operations to insert implants in his forehead, forearm and hand.

Sandro believes that his appearance has made it difficult for him to find a job or a relationship, but it has also boosted his confidence.

He said: ‘Friends have tried to talk me out of the modifications, especially when it came to cutting off my ears, but I’m just a person who likes to go his own way. 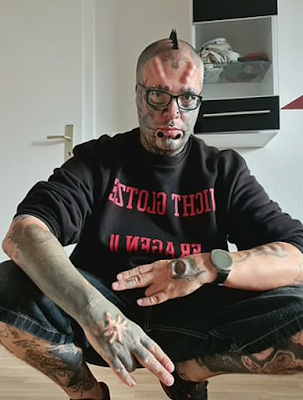 ‘If people stare I really don’t care. If someone says something like ‘you are a sick old man’ then I will answer with ‘thank you for the compliment’.’

He claims that negative comments ‘go in one side and out the other.’

‘It has strengthened my self-confidence above all,’ Sandro added.

But he warns those who are interested in exploring body modification to make careful decisions and make sure they’re doing it for the right reasons.

He said: ‘If you’re a beginner, do long and thorough research, think carefully about everything and take your time.

‘Above all, never do something just because you want to be more blatant or cool with it; it has to come from the heart and be for yourself.’

Modric reveals what will happen to Barcelona when Messi leaves