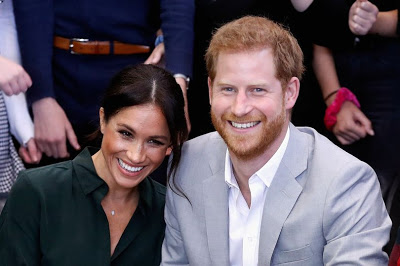 The couple are currently in lockdown in LA with one-year-old son Archie Harrison after stepping down as senior members of the Royal Family to forge their own path.

And since moving to the City of Angels, they have been keeping themselves busy with charity work, as well as supporting the Black Lives Matter movement.

Now, the pair have found the time to send a heartfelt letter to national sports charity StreetGames, which helps young people in disadvantaged areas, the Daily Star reports.

But some social media users have been left scratching their heads over Harry and Meghan’s decision to use their joint H&M monogram with a crown on top – despite them distancing themselves from the royals.

They have, however, decided not to call themselves the Duke and Duchess of Sussex or use a HRH title and instead signed the letter off ‘Harry & Meghan’.

One person commented: “They need to take that crown out of that M logo.”

A second said: “No royalty-no crown!!”

Rushing to Meghan’s defence, another remarked: “She’s still royal, a Duchess and married to the son of a future king. There’s no reason for the coronet to be removed.”

Others also pointed out that Princess Diana and Sarah Ferguson, the Duchess of York, continued to use a crown on their letters following their divorces from Prince Charles and Prince Andrew.

READ ALSO:   Nigerians panic,react as mysterious deaths in Kano allegedly rises above 600 in one week

Meanwhile, the letter dated June 19, was sent to StreetGames who have since shared their delight.

They tweeted: “Wow. Thank you so much Harry and Meghan for your kind words and your continued support for StreetGames and the brilliant local organisations working to support their communities in these challenging times.”
The organisation has been playing a crucial role in distributing fresh meals to young people across London during the coronavirus pandemic.

Meghan and Harry said they were “touched to witness from afar the coming together of the organisations we champion and so deeply care about.”

They said: “We wanted to write and express our heartfelt thanks to the team at StreetGames following their support delivering Hubb Community kitchen meals throughout London.

“To know that North Paddington Youth Club, Solidarity Sports and St Matthews Project distributed hundreds of freshly prepared meals across their networks of young people over the last few months is fantastic.

READ ALSO:   16-year-old girl thrown to her death 'by her uncle after she spoke out against his abuse'

“The impact of Covid-19 has been a scary and testing time for so many people from all walks of life, all over the world.

“However, it is difficult times like these that goodwill to others and community spirit prevails.” 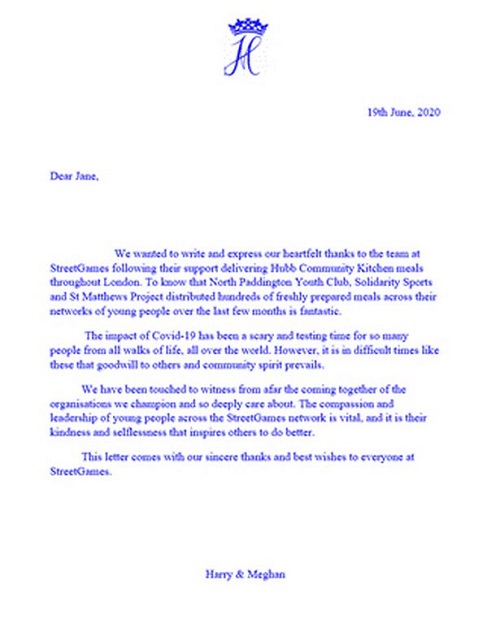 Amazon CEO, Jeff Bezos becomes the World’s first person to have a net worth of...

Ooni of Ife Called Out Over Tinubu’s Insolence