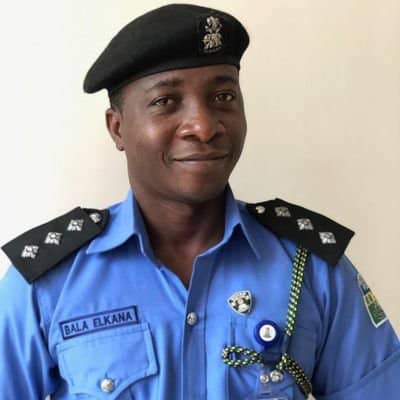 The National Association of Online Security Reporters (NAOSRE) has fecilitates with the Lagos State Police Command Public Relations Officer, Bala Elkana on his new promotion to the rank of Superintendent of Police.

NAOSRE is a body of All investigative and Online Journalists covering the security beat across the country. Elkana was among the newly promoted Police Officers by the Police service commission led by former inspector General of Police, Alhaji Musiliu Smith. These set of Officers have distinguished themselves in their chosen career over the years. Bala Elkana is an exceptional police officer who has demonstrated professionalism, gallantry and top rated Police-Civic engagement and image making.

While reacting to the promotion of the Elkana, the National President of the Association, Oki Samson said that, he received the news with excitement and charges the state command public relation officer not to relent in its effort to continue to promote the gallantry works of the commissioner of Police, CP Hakeem Odumosu and the State Command to get rid of crime and other social vices in Lagos.

The Association extolled the exemplary leadership style and proactiveness demonstrated by the Police officer since he was appointed as the State Command Image maker and Praise his ‘professionalism, proactiveness in media engagements’. As Elkana is decorated with the new Rank, NAOSRE wish him more giant strides and successes in service to his Father’s land.