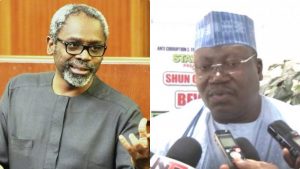 A Civil Society Organisation, Niger Delta Movement for Peace & Justice, NDMPJ, on Wednesday, threw its weight behind the National Assembly over its move to investigate the alleged misappropriation of N40 billion by the interim management committee of Niger Delta Development Commission.

Recall that Senate had on Tuesday set up a seven-man adhoc committee to investigate into the financial transactions, which amounted to N40billion carried out by the IMC on behalf of the NDDC within the last three months and report back to the House in one month

But the CSO in a statement entitled, “unprecedented impunity, corruption and abuse of power in NDDC: NASS to the rescue,” which was signed by its national coordinator, Comrade Etifit Nkereuwem, said this was a wakeup call on elected representatives to always formulate and execute policies and programmes that would promote the socio-economic well being of people, especially the poor masses.

Interim Management Committee which according to him, was inaugurated without backing in line with its oversight function.

He, however, regretted that the reason behind President Buhari setting up the IMC and forensic audit to end the financial recklessness and properly reposition the Commission to achieve its mandates in the region has failed.

The statement reads, “We have risen in strong support of the National Assembly on their well thought-out investigation into the allegation of mismanagement and misappropriation of over N40bn in the Niger Delta Development Commission (NDDC) under the Interim Management Committee without recourse to established processes of funds disbursement and Fiscal Responsibility Act 2007. This is not in tandem with the anti-corruption crusade of president Buhari.

“It should be noted that President Muhammadu Buhari during his meeting with the South-South Governors on Thursday, October 17, 2019, led by the immediate past governor of Bayelsa State, His Excellency Seriake Dickson expressed dismay and disappointment with the dismal performances of the Commission despite huge financial provisions.

“He, therefore, ordered a forensic audit of the agency within three months. In line with the NDDC Act, the president sent names of nominees for the Governing Board of the NDDC to the Senate on October 24, 2019.

“While the Senate was going with screening of the nominees, the Minister of Niger Delta Affairs, Senator Godswill Akpabio without the backing of the Law inaugurated a three-member Interim Management Committee, headed by Dr. Joy Nunieh on Tuesday, October 29, 2019.

“This is indeed unfortunate, illegal and a slap on our democracy which was widely condemned by all well-meaning people in this country.

“The Senate in its avowed commitment to democratic practice duly screened and confirmed the NDDC nominees on November 5, 2019 for the inauguration by the president.

“This has been put in abeyance by the presidency without any justifiable reasons.

It would be recalled that President Buhari’s action of setting up IMC and forensic audit was to forestall financial recklessness and reposition the Commission to fast-track socio-economic empowerment and infrastructural development of the region.

“The IMC has been bedeviled with the same financial misuse, misapplication, misappropriation, and outright fraud in the management of funds in the NDDC.

“It is in the interest of our democratic governance that we totally align with the National Assembly in its bid to restore sanity, order, probity and Accountability in the Commission through proper investigation into this misrule.”