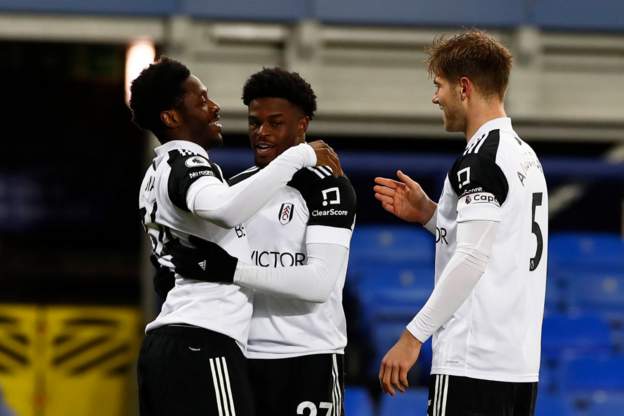 Josh Maja said he saw a dream become reality as he marked his full debut with a brace to help Fulham boost their Premier League survival hopes with a deserved win at Everton.

The visitors were by far the better side in the first half but were left frustrated as they missed several opportunities to score, with Bobby Decordova-Reid hitting the post and Harrison Reed driving over.

But their dominance was rewarded early in the second half when Nigerian striker Maja – a deadline day signing on loan from Bordeaux – slid in to turn home Ola Aina’s cross from close range.

Maja, 22, then capped a superb debut with a second, tapping in after Reed’s shot had hit the woodwork.

The former Sunderland striker said: “This is a night I have been dreaming about for a long time. I had a feeling it was coming and pleased it became a reality.

“We took our chances when it came and put in another good performance again, we want to continue like this.”

Everton were poor throughout and although Seamus Coleman clipped the outside of the post in the first half, they rarely looked like scoring.

Joshua King did have the ball in the back of the net late on but it was ruled out for offside.

There is still plenty of work to do for Fulham to escape the drop, with this victory cutting the deficit to safety to seven points, but it will significantly boost their hopes they they can fight their way out of trouble.

Defeat for Everton, meanwhile, means they remain seventh on 37 points.

Fulham striker Josh Maja is just the second Nigerian player to score a brace on his first Premier League start, following Efan Ekoku for Norwich City back in May 1993 (v Middlesbrough).

Also, Ola Aina assisted Maja’s first goal. The previous Premier League goal scored and assisted by players representing Nigeria was on 17 April 2010, when Yakubu scored for Everton from a Victor Anichebe pass in a 3-2 win over Blackburn.

READ ALSO:   See What Happened To Tyson Fury Ahead Of His Bout With Anthony Joshua

Maja and Aina are both born in London, but play for Nigeria.

Wizkid reveals why he cannot date or marry a poor girl

Sad!Man charged with fatally stabbing 7-year-old girl for drawing a picture of him to cheer...

What Osinbajo Says About His Strategy For Ending Boko Haram War