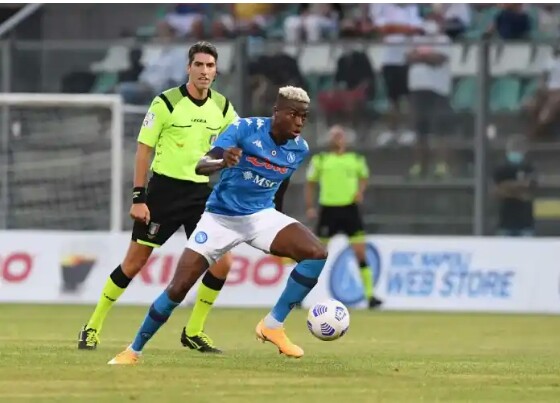 Victor Osimhen scored a hat-trick and provided an assist in his first game for Napoli who smashed Italian fourth division club L’Aquila 11-0, in their first pre-season friendly game on Friday, Completesports.com reports.

Osimhen who recently joined Napoli from Lille in this transfer window, netted his three goals inside the opening eight minutes of the game.

He then turned provider as he assisted for Napoli’s eight goal.

The Super Eagles striker opened scoring in the 2nd minute and quickly got on the score sheet again In the 3rd minute.

He then completed his hat-trick in the eight minute to put his side 4-0 up.

In his only season in the French Ligue 1, Osimhen netted 13 goals in 27 appearances.

His impressive performance saw him voted Lille’s Player of the Season.

Wenger Says What Mbappe Is Likely To Get Soon