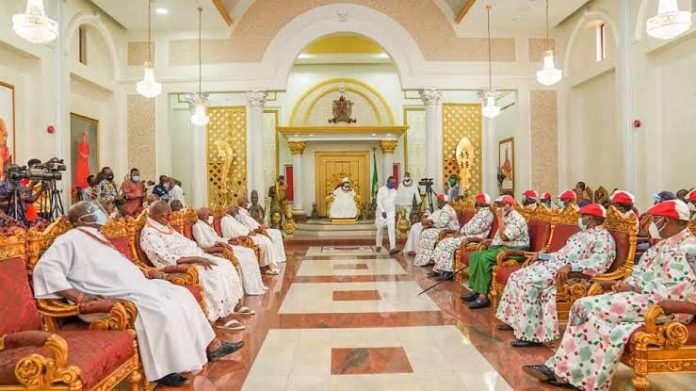 Osayande Aisagbon, director of protocol (DoP) at the Edo government house, has been redeployed to the ministry of culture and diaspora affairs following alleged “embarrassment suffered” by Godwin Obaseki, the governor, during a visit to the palace of oba of Benin.

In a memo, Obaseki directed that Aisagbon be redeployed over the alleged embarrassment and the DoP was replaced with Mosis Obakpolor, a staff of the same ministry.

Obaseki visited the Benin monarch on July 25 for royal blessings as part of his reelection campaign but was unable to present kolanut and Gin in line with the palace tradition for the blessings.

The monarch had reportedly asked for kolanut to offer the prayers for the visitors but none could be provided.

The Governor, accompanied by the party’s National Campaign Chairman of the PDP, Mr Nyesom Wike, were left embarrassed when protocol team of Obaseki failed to present kolanut and Gin to the Benin monarch to receive royal blessing.

The visitors to the Palace, including Governor Obaseki were left embarrassed when Kola Nut to offer prayers for the Governor and his entourage could not be provided.

It is always customary of visitors to the Palace to provide Kola Nut and Gin for prayers.

“The governor was embarrassed. It’s the responsibility of the protocol department to handle such assignment, so somebody has to take responsibility,” a source in the government house was quoted to have said.

“The governor and his visitors were embarrassed over the development and such matters ought to be handled by the protocol department so somebody has to take responsibility. What happened was unfortunate. It’s not as if the kola was not bought. The kola was brought late when the oba was already seated with his guest and you know with that, nobody comes in when the oba is seated.”

Agboola Ajayi, deputy governor of Ondo state; Uche Secondus, national chairman of PDP and Raymond Dokpesi, chairman of DAAR Communications, were also at the palace of the oba.

What Buhari Said About Beheading Of 44 Farmers By Boko Haram...