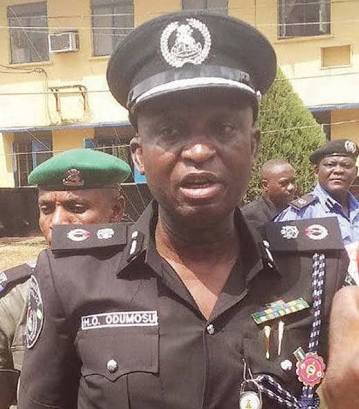 Odumosu Hakeen, Lagos Commissioner of Police has gone tough on prevailing indiscipline amongst officers under his command.
The Lagos Commissioner’s renewed vow to stamp out indiscipline follows public outcry over seeming unethical operational modes amongst officers.
The development had prompted Inspector-General of Police, Mohammed Abubakar Adamu’s directive on strict compliance to ethical standards.

The IGP’s directive was contained in a press statement issued by the Force Public Relations Officer, DCP Frank Mba.
In the statement, IG frowns at officers’ disobedience to the rules of engagements in some units.
In compliance with the IG’s directive, Odumosu, on Sunday, through a statement by Superintendent Olumuyiwa Adejobi vows to arrest erring officers.

In the statement, Odumosu ordered his monitoring teams to go after, arrest and prosecute any personnel of police tactical squads, including Federal Special Anti Robbery Squad (FSARS), SARS, Special Tactical Squad (STS), Intelligence Response Team (IRT), Anti Kidnapping, Anti Cultism, or Anti Robbery teams or under any nomenclature from Lagos command or any formations within Lagos State, engaging in Stop and Search and any other low-risk operations like patrol; and operating on mufti, against the directives of the Inspector-General of Police.

CP Hakeem Odumosu reinstated that any police officer who wants to embark on patrol, Stop and Search, checking of information etc must be on official police uniform with identification cards conspicuously hanged on his or her chest.
He further ordered that the Area Commanders and Divisional Police Officers in Lagos State must discourage and kick against the use of commercial buses or unbranded vehicles for such operations, except on surveillance or decoy, which must be approved personally by the Commisioner of Police.

The police chief also vowed to hold any Area commander and Divisional Police Officer where police harassment, brutality or extortion occurs, vicariously accountable and shall accordingly be disciplined.
While encouraging members of the public to report any ugly and unprofessional conducts of the police to the command via the Public Complaint Bureau phone digits: 09057597931, 09010512350, 09010512348 and 09090003792, he affirmed his commitment to sanitize policing system in Lagos Command and achieve people-oriented Nigeria Police Force in Nigeria.