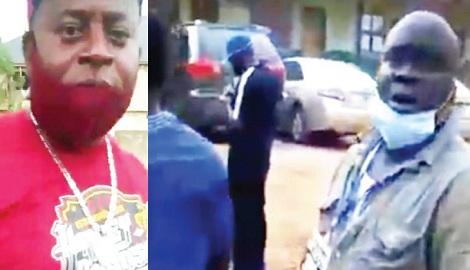 An unnamed official of the Covid-19 task force of the Ojodu Abiodun Local Council Development Authority of the Ifo Local Government Area of Ogun State, who was filmed assaulting a woman, has been arrested by the police.

The woman, identified simply as Tolu Adesh, had taken to Twitter on Saturday to lament how the task force officials extorted money from her family over an alleged infraction of the lockdown order in Ogun State.

The Transition Chairman, Ifo Local Government Area, Fola Salami, announced the arrest of the official in a statement on Monday as well as the suspension of other officials of the task force for alleged extortion, with a promise to investigate the allegation.

While the restriction on movement has been partially lifted in Lagos, Ogun State still forces residents to stay indoors on weekends.

Ojodu Abiodun is a boundary community between the two states, with no specific markings to demarcate both states.

Adesh, in a series of tweets on Saturday and accompanied by footage of the incident, said she was going to buy a bicycle for the seventh birthday of her daughter in a supermarket when she was stopped by the officials.

She wrote, “We were stopped at the intersection between Lagos and Ogun states (which isn’t properly marked) by Ogun State task force officials, who informed us that there was total lockdown in Ogun State during weekends and since we were in their territory, we had to get a pass from their local government office, which is about three minutes away.

“They seized my husband’s ID card and requested that we drive them to the office. We refused to pick them in the car because of the Covid-19 situation and they got really upset.

“I agreed to walk with the official, while my husband drove behind us to their office.

“When we arrived, we were handed over to the man in the video, who told us we would pay a fine of N15,000 for disobeying the lockdown that was in place.

“We explained that we didn’t live in Ogun State and weren’t aware of the lockdown and asked to be pardoned so we could go home.

“I started recording because I saw that my pleas were falling on deaf ears, while the officer called a guy to deflate our tyres. While recording, the man beat me, kicked me, pushed me and punched me because of N15,000.”

The attached footage showed a man in blue deflating the tyre of the car, as the woman filmed the scene.

The leader of the team, on realising that the woman was recording him, punched the phone away when the woman asked him the name of the council.

The woman, who refused to give up, continued filming, as the man attempted to kick her.

“Nigerians do you see him beating me? Show me your face. Domestic violence. Where are you running to? Why are you hiding?” she said, trailing him, as the man hit her.

There was commotion in the background as people tried to intervene, while the woman shared her story with viewers.

The Ogun State Government, while replying the tweet, said the matter was being looked into.

“Rest assured, we’d investigate this unpleasant development and sanction anyone that is culpable,” the tweet read.